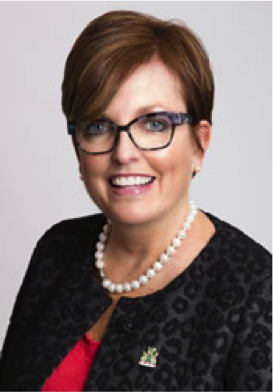 Minister of Tourism, Culture and Sport

The Honourable Eleanor McMahon was elected to the Ontario legislature in 2014 as MPP for Burlington. On June 13, 2016 she was appointed as Minister of Tourism, Culture and Sport. Previously she served as Parliamentary Assistant to the Minister of Natural Resources and Forestry, where she initiated a review of the Conservation Authorities Act.

Eleanor has spent her career in senior roles in business, government and the not-for-profit sector and is the founder of the Share the Road Cycling Coalition. She spent the early part of her career on Parliament Hill in a number of roles including Press Secretary in the office of the Right Honorable Jean Chrétien. She has served at the Canadian Advisory Council on the Status of Women, the Canadian Chamber of Commerce, Petro-Canada, United Way Ottawa, and the Ontario Medical Association.

The tragic death of Eleanor’s husband, OPP Sergeant Greg Stobbart – killed in a cycling collision in 2006 by a driver with five convictions for driving under suspension – led her life in an entirely new direction. Eleanor’s reaction to this unthinkable loss was to begin a campaign to improve road safety and enhance legislation in Ontario. In 2008 she launched the Share the Road Cycling Coalition, a provincial cycling policy and advocacy organization created to unite cycling organizations from across Ontario and work with municipalities to make their communities more bicycle-friendly.

In 2008 Eleanor began lobbying for enhanced penalties for suspended drivers in Ontario. As a result of her advocacy, Greg’s Law was passed on April 22, 2009 and became law in September 2010, making our communities safer by reducing the number of suspended drivers and repeat offenders on Ontario’s roads.

Through her breadth of experience Eleanor understands how working together with the business community will create jobs and grow our economy; and how investing in people creates stronger communities.