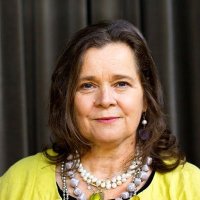 Kelly McEvenue has been on the coaching staff of the Stratford Shakespeare Festival for 30 seasons as the teacher of the Alexander Technique and as a movement coach. She teaches at the Birmingham Conservatory for Classical Theatre training at the festival.

Kelly is an Associate Artist with Soulpepper Theatre Company where she teaches with both the Academy and coaching the acting company. She is a guest teacher on the faculties of the National Theatre School and the Canadian Film Centre. Internationally she has taught in the USA at the Interlochen School for Performing Arts and Wayne State University in Michigan.

Kelly has assisted renowned voice teacher Patsy Rodenburg in several International Workshops for Voice Teachers at the Royal National Theatre and was on the faculty at the Guildhall School of Music and Drama in London, England.

Her book, "The Actor and the Alexander Technique" is published in the UK and New York.