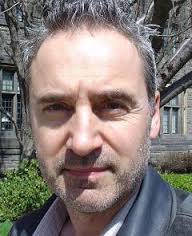 John Paizs
Director in Residence at the Canadian Film Centre

John Paizs was born and raised in Winnipeg, Manitoba. Originally his ambition was to be an animator and while still in high school he created a four-minute Disney-style animation which in 1978 received a special citation from The British Film Institute.

Upon graduating with a Bachelor of Fine Arts degree from the University of Manitoba in 1980, Paizs decided to switch to live-action filmmaking. Equipped with a secondhand Bolex camera he embarked on a series of ultra low-budget comedies which would earn him in the mid ‘80s the reputation as Canada’s leading independent filmmaker. He wrote, produced, directed and starred (as the Silent Man, a nod to Buster Keaton) in these six outstandingly imaginative films. Taken together they remain today one of the most impressive and influential bodies of independent film work produced in Canada.

Of these six films two in particular stand out: the suburban satire SPRINGTIME IN GREENLAND (1981), cited as Canada’s first postmodern film; and the feature-length “writer’s block” comedy CRIME WAVE (1986), hailed upon its release as the funniest Canadian movie ever made.

Paizs’s independent films have been presented at such prestigious venues as the Lincoln Centre and the Museum of Modern Art in New York City; the Boston Museum of Fine Art; the Walker Arts Centre in Minneapolis; the Wexner Centre for the Arts in Columbus, Ohio; and the Centre George Pompidou and the Galerie Nationale du Jeu de Paume in Paris, France.

After completing CRIME WAVE, Paizs decided to retire from independent filmmaking. A new chapter in his directing career opened in 1990 when he was invited to direct for the hit TV series The Kids in the Hall. It was his first professional directing engagement.

Many more were to follow, both in TV and in features. They include helming the 1999 festival hit TOP OF THE FOOD CHAIN (a.k.a. INVASION!), starring Campbell Scott and Tom Everett Scott, and the 2005 made-for-TV horror-fantasy MARKER.

A third chapter in Paizs’s directing career opened in 2000 when he joined the Canadian Film Centre as its Director in Residence. He remains vigorously engaged there today, mentoring Canada’s brightest filmmaking lights of tomorrow.