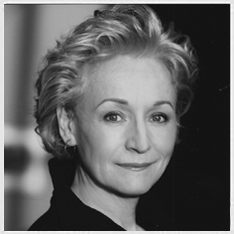 Rosemary is an award-winning actress whose career has taken her onto stages and film and television screens across Canada, the United States and Europe. In 2009 she was given the Actra Award for Best Actress in recognition of her work in THE BABY FORMULA. She began her career on stages across Canada playing leads in Stratford for two seasons and Canadian premieres of shows like Sam Shepherd¹s BURIED CHILD and Marsha Norman¹s GETTING OUT. Other highlights include a Dora nominated one woman show SINGLE, STRAIGHT AHEAD, BLIND DANCERS (selected Best Performer at the Edinburgh Fringe by the London Daily Telegraph, Dora Award) and plays ranging from PRIVATE LIVES to FALLEN ANGELS, THE DOMINO HEART, THE GLASS MENAGERIE and THE BEAUTY QUEEN OF LEENANE. She was awarded the Masque Award for Interpretation Feminine for her performance in WIT and was nominated for her work in LONG DAY¹S JOURNEY INTO NIGHT. Also in Montreal, she was given the MECCA award for Best Actress for her work in GLORIOUS! Recently in Toronto, she appeared in TOM AT THE FARM (Dora nomination) FESTEN, PIECES, THE SISTERS ROSENSWEIG, THE NEW ELECTRIC BALLROOM (Dora Best Actress nomination), TOUT COMME ELLE in the 2011 Luminato Festival. She appeared in KAYAK, HAUNTED, ALLIE AND KEV and LATE COMPANY in recent Summerworks Festivals.

Rosemary entered the world of the camera with equal success. Her first major television appearance in CBC¹s Blind Faith won her the Earl Grey Award for Best Performance in a Leading Role. Her frequent television appearances have garnered her four Gemini nominations. She is probably best known for her role as "Katherine Brooke"in Anne Of Green Gables-The Sequel, and the title role in the CBC series MOM P.I. She split her time between Los Angeles, Vancouver and Toronto. While in LA she appeared in many TV series and movies of the week. Some favourite roles were in Total Recall, Twins, The Interrogation of Michael Crowe, Dreamcatcher and Citizen Duane. Recent projects include episodes in Remedy,Cracked, Crash and Burn, Living in my Car, Unnatural History and The Murdoch Mysteries, MOW's Runaway at 17, Red, The Good Times are Killing Me, Too Late to Say Goodbye, Playing House, Wedding Wars, St. Urbain¹s Horseman, The Santa Suit and features At Home By Myself with Me, Orphan, Faces in the Crowd, The Perfect Surrogate(directed by CFC grad Adrian Wills), and Don't Get Killed in Alaska. She is featured online currently in two award winning webseries: Guidestones and Ruby Skye P.I. (directed by CFC grad Kelly Harms). Look for her this television season in Orphan Black, Between and online in webseries (involving numerous CFC grads) The Plateaus.

Rosemary is also a sought after theatre director. Some of the plays she has directed are HOCKEY MOM. HOCKEY DAD MEASURE FOR MEASURE, DINNER WITH FRIENDS,

Rosemary teaches at Equity Showcase, the National Theatre School, University of Toronto, S.I.F.T., George Brown College, Film Training Manitoba and Halifax Shortworks. Rosemary is listed in Who’s Who in Canada and in 1990 was included on Maclean¹s Magazine¹s Honour Roll as a "Canadian who makes a difference”