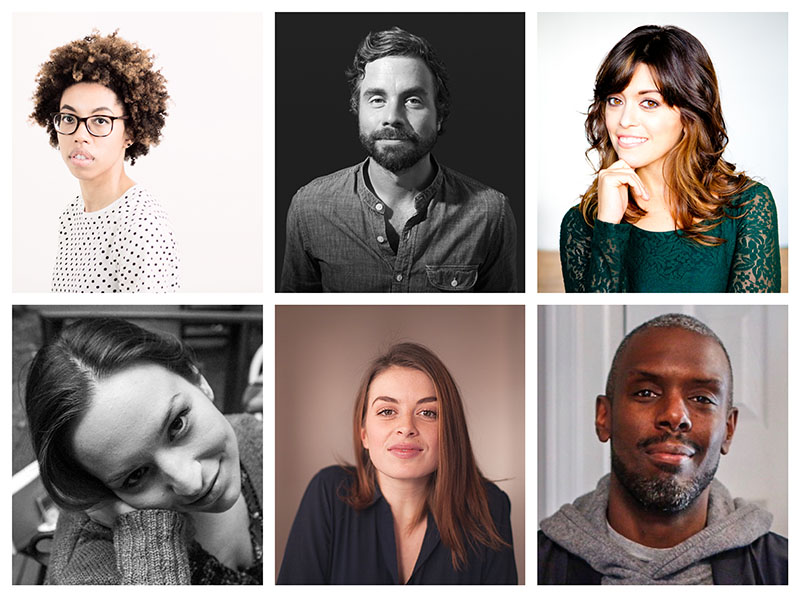 We are thrilled to announce the six new writers who will be joining our 2019 Bell Media Prime Time TV Program when it gets underway on this upcoming Monday, September 23.

This renowned and highly competitive TV program, now in its 20th year, delivers a real-world story room experience for residents. The incoming TV writers will spend the first three months of the program working closely with this year’s Executive Producer in Residence, award-winning writer/producer Bruce Smith (Street Legal, 19-2, Cracked), to develop his original series, Judas. Throughout this time, they will have the opportunity to work collaboratively and hone their skills before they prepare to develop their own original series concepts and pilots throughout the last half of the program. The program will conclude with a showcase event, where the residents screen “teasers” of their original series concepts in front of a live audience of industry executives and guests.

The format of this program is designed to build strong series writers and generate original series content for the marketplace, which helps residents and alumni of the program thrive as successful, global creators in today’s evolving marketplace.

This year’s residents are a dynamic and talented group of writers with wildly different and interesting backgrounds – lawyers, actors, journalists, playwrights, music executives – that are sure to bring unique perspectives and exciting ideas to the story room.

Meet these six writers below and hear their answers to the question: What character from a series would you love to write a spin off for, and why?

Henry Campbell is a writer and recovering lawyer. A graduate of the University of California Los Angeles’ Professional Program in Writing for Television, he has written features, pilots and many, many shorts. Campbell’s novel, Casings, won second prize in the notorious 3-Day Novel Contest. A director of the Jump Current Performance Society and a judge for the Brenda Strathern “Late Bloomers” Writing Prize, he has lived in Whitehorse, East Vancouver, Calgary, New York City, and, most recently, Bowen Island. Campbell is supported by Creative BC, The Daryl Duke & William Vince Scholarship Fund and the Jordan Christianson Bursary Fund.

“Ruth from Ozark is such a badass. Imagine a spinoff in which she’s the head of a criminal empire, all set to a 1990s rap soundtrack. Perfect.”

Imogen Grace is a film and television writer who studied theatre in New York City. Her feature screenplay, Audrey, 2.0, has won awards at the New Orleans and Oaxaca Film Festivals, and also the Script Pipeline screenplay competition. For the past few years, Grace has been honing her television production skills on television series, including Suits, The Umbrella Academy and Anne with an E.

“I'd love to write a spinoff where we follow Elaine Benes from Seinfeld, as a high-powered book publisher in New York navigating single life in her fifties... mostly because I just want to watch that show.”

Amy Halloran is a Montreal-based Métis writer and graduate of Concordia University’s Film Production Program. With a background in acting and journalism, she has written various film and TV projects, including most recently an adaptation of Rest Stop, a short story by Stephen King, for which she won a LA Shorts Award. Since graduating in 2017, Halloran has worked in the industry assisting directors, including filmmaker Jean-Jacques Annaud, and producers, actors and most recently, the writers on Seth Rogen’s comedy series, Future Man.

Rose Napoli is a playwright, actor, writer and producer. She was named by NOW Magazine as one of the top 10 theatre artists in 2017, and was called a “rising star” and “an artist to watch” by the Toronto Star and Globe and Mail, respectively. Napoli is the author of six plays, including Lo (or Dear Mr. Wells), which was nominated for a Dora Mavor Moore Award for Outstanding New Play. She is published with Scirocco Drama.

“I'm generally suspicious of spinoffs, but I do wonder what Meadow Soprano is up to these days. That can't be pretty.”

Lori-Ann Russell is an award-winning writer and actor from Kingston, Jamaica. Before becoming a writer, she worked in theatre, honing her talents for the stage and earning an Award of Excellence from the Ontario National Theatre School (NTS) Festival. Russell’s most recent production credits include She Said Films’ short film, Wet Blanket, and award-winning digital series, Running with Violet. A graduate of York University, she holds a BA in English Literature.

“Brooklyn Nine-Nine's Rosa Diaz, because she’s a sardonic ray of sunshine that neither television nor myself can live without!”

Ian Steaman is a music executive and an award-winning Toronto screenwriter. He was a 2018 Al Magee Diverse Screenwriters Fellow and Pilot Project winner in the webseries category, and this year, was both a Toronto Screenwriting Conference Breakthrough Artist and a Reelworld Emerging 20 (E20) participant. Currently, Steaman is scripting a CBC Music documentary series, guest curating for Wavelength Music, and developing an hourlong scripted drama set in the world of the Toronto hip-hop industry.

“I would love to write a spinoff show around Darius from Atlanta, first, because Lakeith Stanfield is an amazing actor, and second, he's low-key the most interesting and intriguing character on the show!”

Sign up for our newsletter to stay up to date on all of the CFC’s program announcements!