Since it began, the Fifth Wave Initiative has pledged a commitment to at least 30 per cent membership diversity in all programming initiatives – and it expanded that commitment with its second cohort. Recognizing that COVID-19 has had a disproportionate impact on racialized women – who are already underrepresented in the tech and digital media sphere – all eight companies selected to participate in Cohort 2 are led by BIPOC women.

In anticipation of this cohort’s needs, Fifth Wave convened a special Advisory Committee of BIPOC women. The three members of this council – Neelam Azmat, Orla Garriques and Magnolia Perron – were invited to investigate and guide the program’s tone, language and direction for the entrepreneurs of Cohort 2. We recently caught up with the inaugural trio of members via Zoom to develop a more fulsome picture of the work they’ve been doing so far – and what they’d like to see happen in the future. 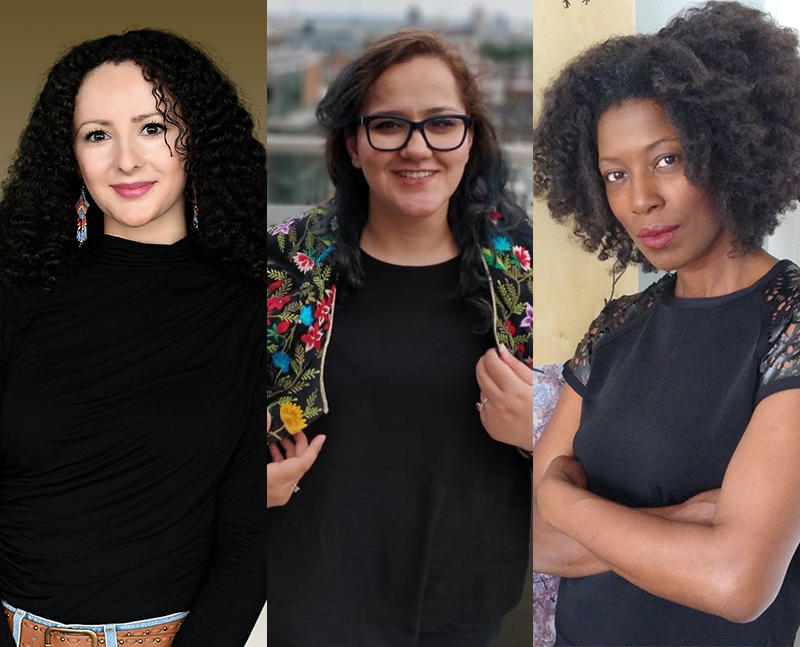 Q: Fifth Wave's BIPOC Advisory Council was created with the aim of guiding the program's tone and language as the accelerator moves forward with heightened sensitivity to issues of race. What were your expectations going into this experience?

Magnolia Perron: To be honest, I don’t think I had any expectations. I knew Nataly [De Monte] because we both work for organizations that receive funding under the Women’s Entrepreneurship Strategy, and we had been on calls together. One day, she reached out and asked if I was interested in this advisory group. Essentially, she said, “We just want you to join and participate in some difficult conversations.” That was the extent of it. I think [my expectations] are a lot clearer now than they were at the beginning. And I feel pretty privileged that she asked me to be in this important role.

Orla Garriques: I think I was more excited, being a CFC Media Lab alum from 2010 – and then also being a facilitator, and leading projects. I was also impacted very much by 2020 and what took place, and wanted to use my voice, and actualize something. I found it exciting to know that I could lend myself in any way possible to this process. It also got me excited that they were going to have a BIPOC cohort. I thought of all these women that that should be a part of it. Because at the end of the day, even though these are difficult times, it’s really about incredibly talented female digital entrepreneurs. Regardless of their race, they’re deserving. I wanted to make sure they got every opportunity to enjoy that.

Neelam Azmat: I think there was a lot of space for growth. There weren’t any rigid parameters. So that gave me the opportunity to think, “There’s space to do things.” I had met Nataly in the first month that I moved to Canada; she was one of the first people I was introduced to. When I heard about Fifth Wave, I literally said to her, “I don’t care what it is, I want to do something with Fifth Wave.” So I was really excited by this opportunity. I think I had the expectation that we would have more clarity by the end. And then I came to this committee and I was immersed in a whole new learning experience.

Q: Six months into the process, how do things look now? Have those expectations been met - or have they perhaps changed since this project began?

Orla Garriques: Now that we’re into it, I want to say I’m glad they considered doing this prior to the [second] Cohort starting. I didn’t know what to expect, but I did come to it with what I knew I wanted to offer. I’m pleased at the openness, and the transparency. We’ve had some very, very difficult conversations. And more importantly, I’m pleased with the immediate action. We’re past the talking point. And over a very short course of time, to be able to see so many actionable things take place, and see the tangible results of [our work], is definitely something that is surprising.

It’s also so great to meet new people like Neelam and Magnolia. There’s a huge assumption that takes place when it comes to BIPOC [as a monolithic term]. The realization is that Black, Indigenous, People of Colour…we’ve never met before. We’ve never had the opportunity to engage. So as we’re trying to do this “BIPOC” thing, I think you also have to give space and understanding to the fact that this is the first time we’re able to convene. And I’ve been able to learn so much from my colleagues to make me a better person in dealing with other communities. So it’s not a one-way street. There are so many tentacles that this has been able to start.

Magnolia Perron: It’s been a learning process from the first meeting we had. I feel with each meeting there was more clarity, and more realization of the larger impact we were having both as a BIPOC advisory committee, and as part of Fifth Wave. Each time we got together, I realized the larger impact that this could have on the work that they’re [Fifth Wave] doing – and how it serves as such a great example. I think it could be a “best practice” for other organizations that are developing programming, whether they’re creating BIPOC cohorts, or just looking at ways to be more inclusive and welcoming.

I feel so privileged to have learned from Neelam and Orla; from what they bring to the table, and what they share. At the very beginning I was shy, and didn’t know what to say. But I feel like seeing the confidence in Orla and Neelam to just share what was on their minds, and have those difficult conversations, encouraged me to realize that maybe I did have something to offer. I really feel like I’ve benefited from this, and as Orla was saying, it’s not a one-way street. I’m excited that it’s going to continue in the Fall. I think that shows [Fifth Wave’s] commitment to this process.

Neelam Azmat: Having the opportunity to connect with people with lived experience, but also expertise – and to talk confidently and candidly about difficult topics – was in itself a great experience. One of the tangible things that Fifth Wave did was to create the space where more candid conversations will happen. I’m sure all of us have sat on committees where you really have to mince your words to convey a message.

In this setting, it is very candid, even for really tough conversations. It’s not easy to be part of when you’re the privileged person in that conversation. I feel like Fifth Wave really listened, really implemented the changes, really created that safe space without making us feel like we could not have those candid conversations with them. For me personally, that was one of the things that built my confidence in being more vocal about what I felt, and bringing that to the table.

Our recommendation of Diversity and Inclusion training for both mentors and the participants in the [2nd] Cohort was deployed very quickly. We talked about it, and within a few weeks, the training happened. I believe there’s going to be proactive diversity training for mentors before the next [3rd] cohort begins. The continuation and expansion of this committee was also result of feedback that we gave, and the team took. That shows the commitment that Fifth Wave has to encouraging and building an inclusive space.

Magnolia Perron: I feel like – in a lot of my experiences, and those of my colleagues –when organizations or businesses bring in an Indigenous person, sometimes it feels like there’s this level of tokenism. I have to say that I did not feel that way at all with Fifth Wave, or this Advisory Committee. I really feel like they wanted to hear what we had to say, and took it seriously. They didn’t expect us to come in and give our time and expertise without compensation. They went above and beyond.

Q: Fifth Wave acknowledges the patterns of oppression and systems of power that have created genuine (and intergenerational) pain and harm for racialized women in every strata of society. In doing so, the program also hopes to transform these patterns and systems. Is this an achievable goal? What would it take to achieve it?

Neelam Azmat: I’m part of the committee because I believe this is an achievable goal. But I feel that at times, we attach timelines to things that are not realistic. You cannot undo centuries of oppression in a system that’s still currently oppressing. The oppression is not a matter of the past, it’s a matter of the present. You can’t dismantle that in five months.

Orla Garriques: One of the things that we looked at, as an advisory committee, was even the definition of feminism, and what perspective that is. I think there need to be immediate fixes first, because I agree with Neelam about a timeline. Those are kind of difficult, but actionable items, and they’re important.

So, from the beginning – when they started out with one perspective of feminism – over a very short period of time, they took it on the board. They opened it up, and realized its different perspectives. That is at the heart of this accelerator: it shifts the space and the atmosphere. Making that immediate change, that actionable change, is why I feel, “Yeah, it’s achievable.”

The other change requires industry-wide change. But the things that the Media Lab is doing, and my colleagues on the Committee are doing, create at least some of these pieces, and prepare for that systematic, industry-wide change. So to answer that question: can change happen? Yes! Because change is already happening. We’re evolving, we’re learning, we all have a role to play. What we’re doing in Fifth Wave is what is already happening in your schools. It’s what is happening in your homes. It is what is happening in your careers and in your jobs. What we’re talking about is how we deal with each other as a society.

Magnolia Perron: Implementing and making these changes within Fifth Wave is a huge step in the right direction. Building off of what Orla was saying, I think it happens at different levels: they’re doing it within Fifth Wave, and the Media Lab, and then there’s the CFC. These changes have to happen at the higher level, but Fifth Wave is trying to be the movers and shakers, and I think that’s really exciting. It has the potential to inspire others within the industry to hopefully take similar action.