​Who’s Who of VR Showcase Latest Works at Cannes


A first-hand account of the 2016 Cannes Film Festival and “Future of Cinema” by Ian Tuason, Production Manager, CFC Media Lab.

The Cannes Film Festival celebrates the best in film from around the world. It was hard to ignore the crowds gathered around the famous Palais des Festival to catch a glimpse of their favourite celebrities on the red carpet (I saw the back of George Clooney’s head). Easier to overlook was the Marche du Film’s NEXT Pavilion, located next to the Palais but hidden in the nook of a small marina, showcasing what the festival dubbed “the Future of Cinema.” 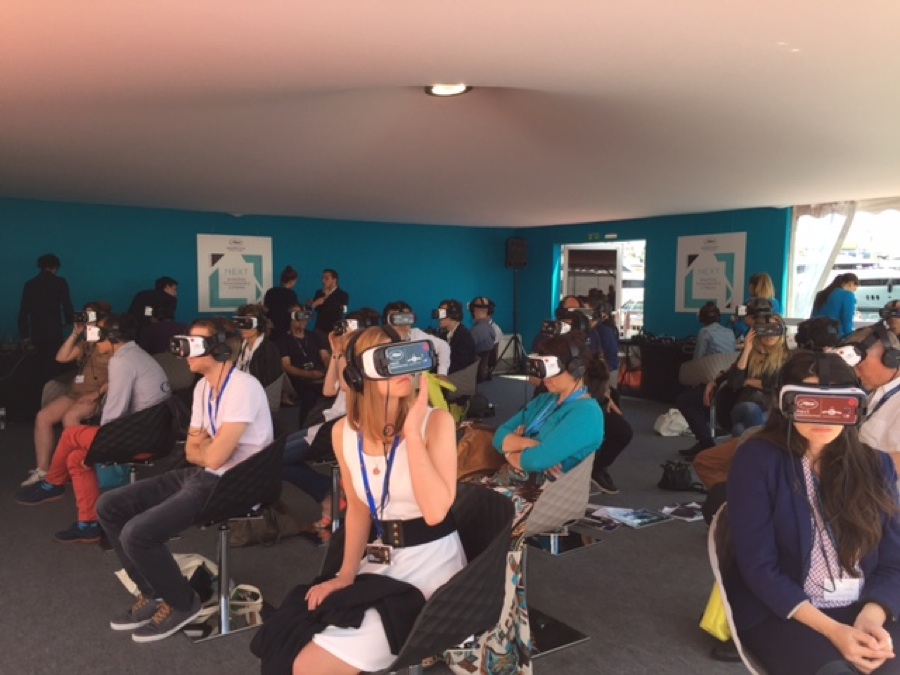 The marina was lined with connecting tents where the who’s who of VR gathered to exhibit their latest work. There was Gabo Arora, the director of Clouds Over Sidra; Milica Zec, the director of Giant;  Yelena Rachitsky of Oculus Story Studio; and Stéphane Rituit and Ryan Horrigan from Felix & Paul Studios, just to name a few.

A “VR theatre” was set up in one of the tents as a space where up to 30 people could watch the same VR content together. It was the first screening in Cannes held outdoors in the sunlight.


It felt like a progressive time for content creators in Cannes. For decades, a finite screen has been used to tell cinematic stories and we’ve been confined to the space of this rectangle. Traditional filmmakers are accustomed to experimenting with the perception of time – jumping in and out with flashbacks, slowing down motion and speeding it up, and playing with timeline. But with VR cinema, we have an infinite 360-degree screen, and are finally able to play around with perceptions of both time and space.

Standing in the crowd of VR creators, I got the overwhelming sense that we were all in a bubble, watching our own work – and everyone out there at Cannes, and even the world, were outsiders.

I mean, who do you know outside the industry that owns an Oculus Rift? I barely know any media professionals who own an HTC Vive. This is why, at Cannes, we at the CFC Media Lab championed the idea that the only way to introduce VR to the masses is through the early adopters – the genre film community. 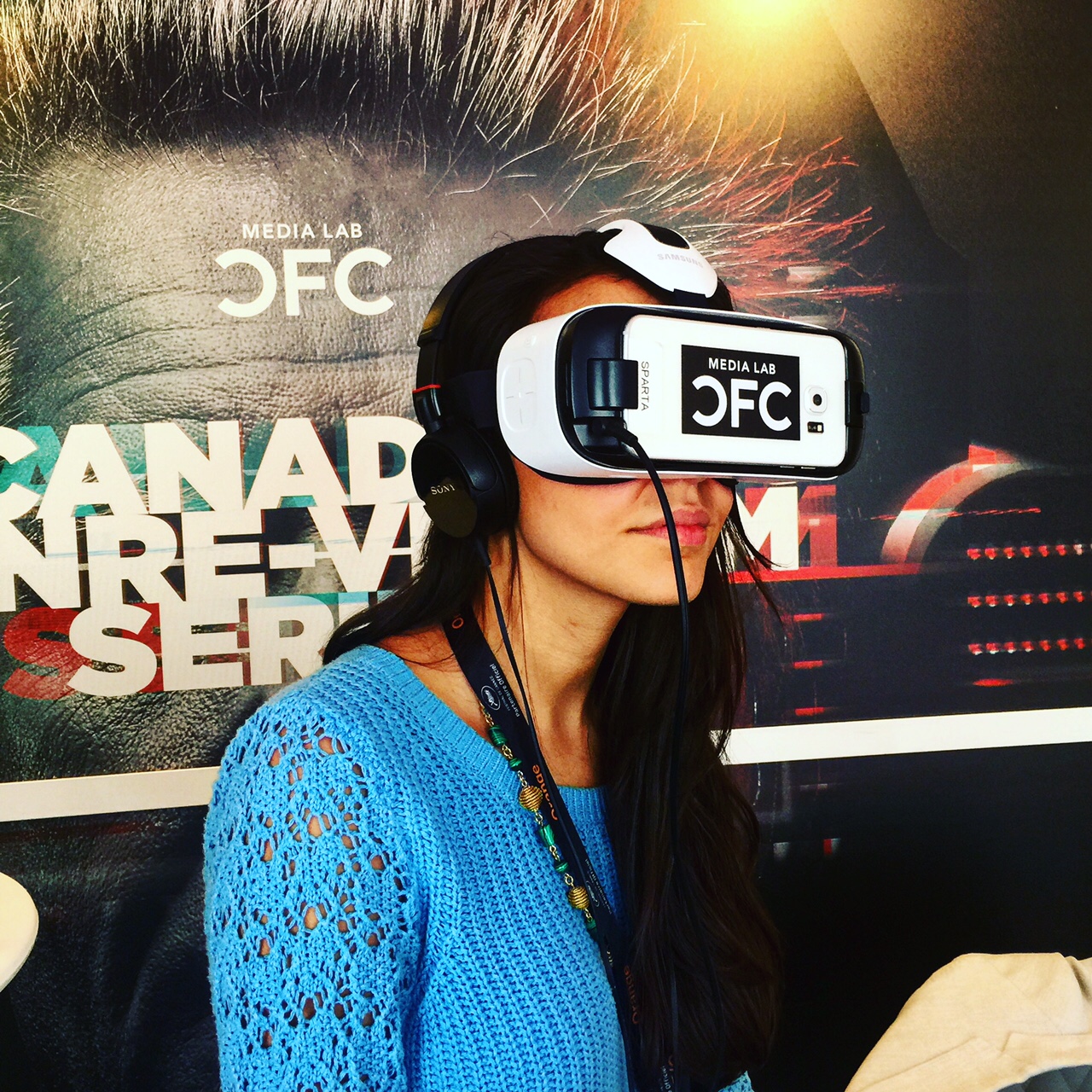 This is a community that embraces the latest technology and the newest style of filmmaking-- the found footage genre of the Blair Witch Project and Paranormal Activity are two examples. The most popular cinematic video games are horror, sci-fi or action. You could make the argument that the greatest Canadian genre filmmaker, David Cronenberg (CFC Board Member, Ex-Officio), made movies about VR, like Videodrome, before the first VR boom in the ‘80s.

We represented this idea through a series of short VR films by CFC Media Lab, Occupied VR and Cream 360 (presented in partnership with Telefilm Canada and Fantasia Film Festival) in the horror, sci-fi and action genres, aimed specifically at the early adopters.

The four short films showcased as part of the Canadian Genre-VR Film Series were Body/Mind/Change Redux Teaser, Technolust: The Short Film, The Closet and War of the Dead.

The full showcase of VR experiences at Cannes ranged from live-action linear experiences, to interactive CG experiences, and a combination of both.

One of the most powerful cinematic VR experiences was Eugene Chung’s Allumette, which used positional tracking to allow users to explore the virtual story set by walking around in, bending over and turning your body to gaze around the characters. I experienced the piece as if I was a giant ghost floating around a miniature stage with tiny actors. The way the actors moved around the stage gave me good reason to follow, move around and explore. I felt so large and God-like, compared to Allumette, the tiny homeless girl who lost her mother. The experience only increased my sympathy, especially when I saw this tiny poor character shivering under a bridge.

Aesthetically, the texture and lighting of Allumette’s 3D assets were beautiful, but the music, tone and story definitely drove the piece. It was a truly cinematic experience where I felt I was a character in the story itself.

But it was Artanim Interactive, creators of Real Virtuality, a multi-user real-time VR experience, that took immersion and the feeling of being a character in a film to a new level. 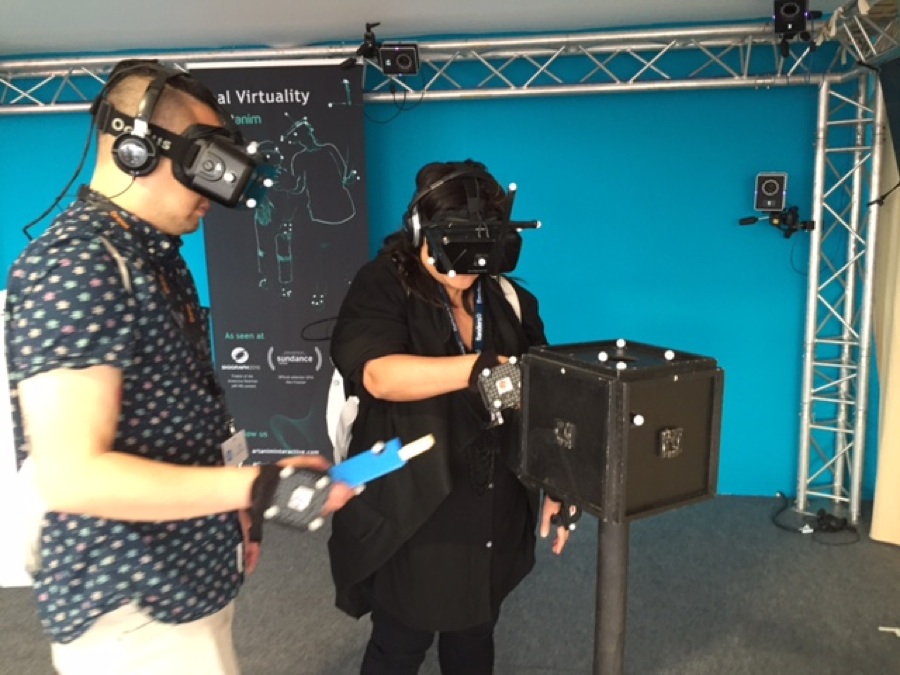 My partner in the Real Virtuality experience was Ana Serrano, Chief Digital Officer of the CFC. She led me through a dark, Indiana Jones-inspired temple, lighting the way through cobweb-infested corridors with a virtual torch in her hand. When she walked away, I called out for her because I couldn’t see through the corridor without her torch. I blurted out, “I can’t see, come back,” and immediately felt as if I was simultaneously writing and acting in a VR movie. (Check out our video below).

The deeper you walked through the interconnecting tents of the NEXT Pavilion, the more you discovered VR experiences transforming into something far different from cinema, and into a new legitimate medium of its own.

It’s easy to get lost in this bubble of innovation, especially while the crowds outside remain oblivious to VR. There was a stark difference from the people in the Palais -- in their tuxedo and fancy dress, celebrating the 100-year tradition of cinema -- compared to where we were – in a make-shift tent, without cameras or red carpet.

Since there are no celebrities in VR, the venue was appropriate. Content creators prefer to let their work speak for itself and that's how it should be.

Six Canadian Films to Get You Ready for Summer