The Inaugural Virtual & Augmented Reality World Conference & Expo 2016 (VRTOC2016) kicked off on June 25, 2016 with a Jazz Code Concert – or “Codecert.” Keynote speaker Dr. Steve Mann, Chief Scientist at Metavision, orchestrated the “codecert,” which was played on a water piano with an electric field light show. The H2OOrchestra/ARchestra set the tone for this inventive and entertaining event.

“Each speaker is here based on the merit of ideas and boldness within their VR subject matter, and all exhibitors bring a unique angle to the space,” said Keram Malicki-Sanchez, VRTO Founder, Executive Director. “The concepts from the conference will explode in directions unpredicted as speakers collide in amazing ways.” Select panels/discussions at VRTOC2016 included: 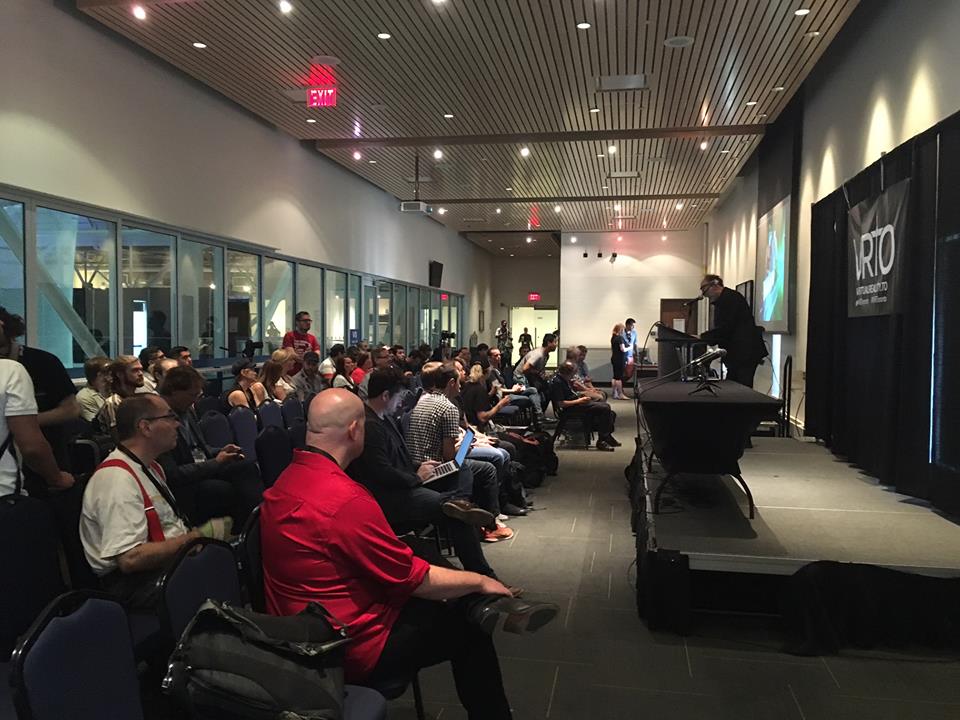 Dr. Steve Mann, Chief Scientist at Metavision, opened the conference by exploring the possibilities of virtual overlay on top of reality and its evolving ethical considerations. In the world of AR/VR capacity he asked: who watches the watchers and who senses the sensors? Drawing parallels between the societal transition of pager to cell phone, he explored what the rapid development of AR/VR might look like in the future. Are we destined to be infinitely fast Cyborgs? How do we, or will we, ensure positive engagement between AR/VR and society? 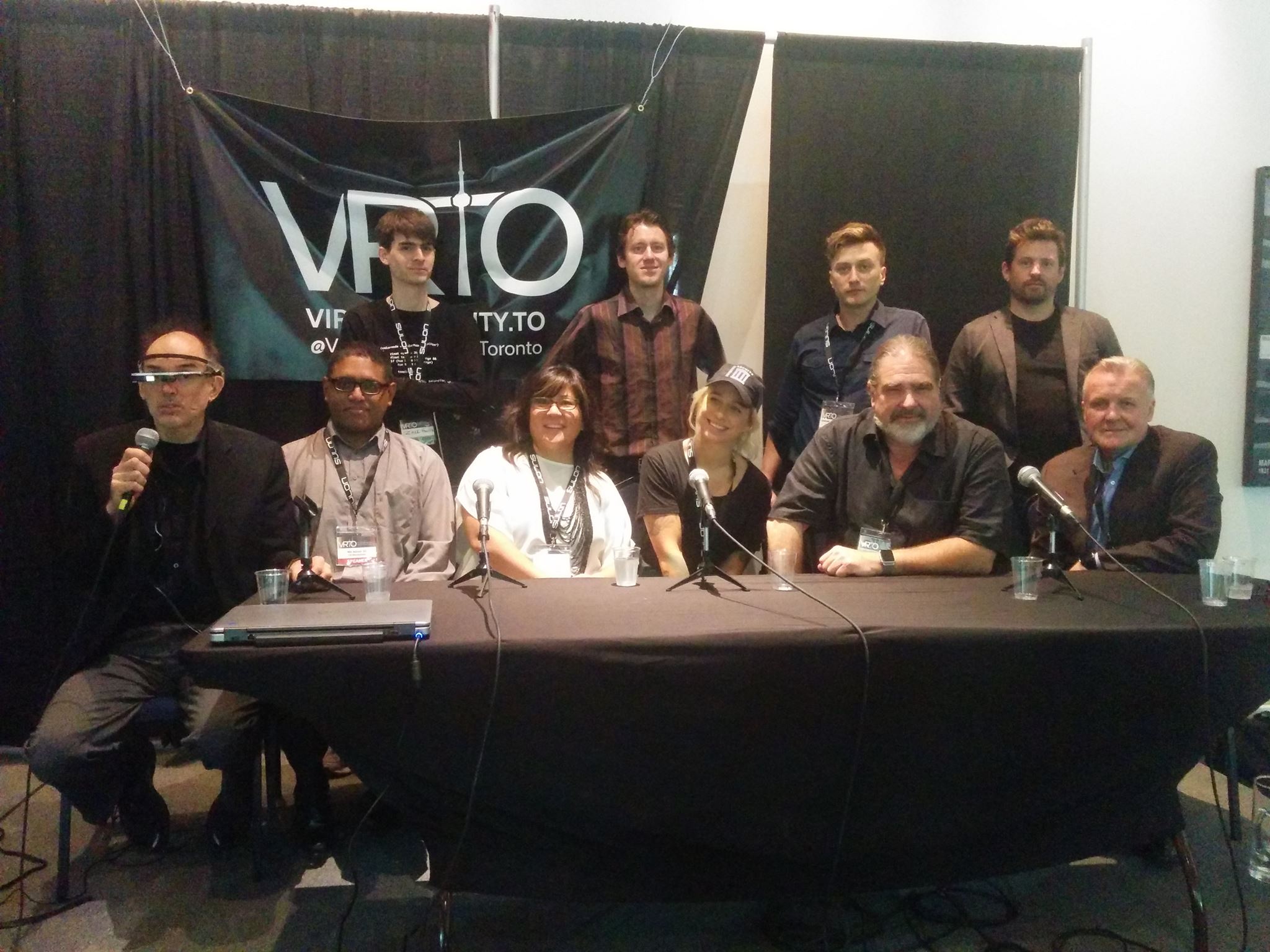 In a spirit of hope and transparency, he led the official drafting of “Code of Ethics on Human Augmentation,” along with our CDO Ana Serrano, Brett Leonard, (Hollywood director of Lawnmower Man), Ken Nickerson (co-founder of Kobo), and many more.

To read the legacy document and contribute to its open-source development, go here, and follow #HACode.

Proof that VR is here

Those in attendance at the VRTOC2016 included VR tech founders, filmmakers and prosumers, who were afforded a unique opportunity to interact with inventors and their inventions. The high growth rate of VR opportunities and the strategic development of b2b alliances was a key trend many discussed. As the AR/VR industry expands, it is driving careers and dream jobs forward. Lawrence Grigorescu of Nirvaniq Labs shared his excitement and love of the industry, describing a daily routine not unlike Iron Man in his experimentation of new technology, devices and innovation. Mettle co-founder Nancy Eperjesy outlined how the market need for VR/AR tools creates entrepreneurial partnerships with powerhouse software players. For example, Adobe recently endorsed Mettle’s SkyBox as a complimentary product in the unveiling of their newest VR editors. Also under discussion was the huge emergence of middleware and APIs to help creators edit and capture. Eye-LIVE technology displayed a prototyped camera embedded within a helmet. The hardware design includes biometric measures and keeps safety in mind during the LIVE broadcast. Realtra demonstrated the power of volumetric VR, tempting participators to move towards the end of a ledge at a paralyzing height with an astounding surreal view. 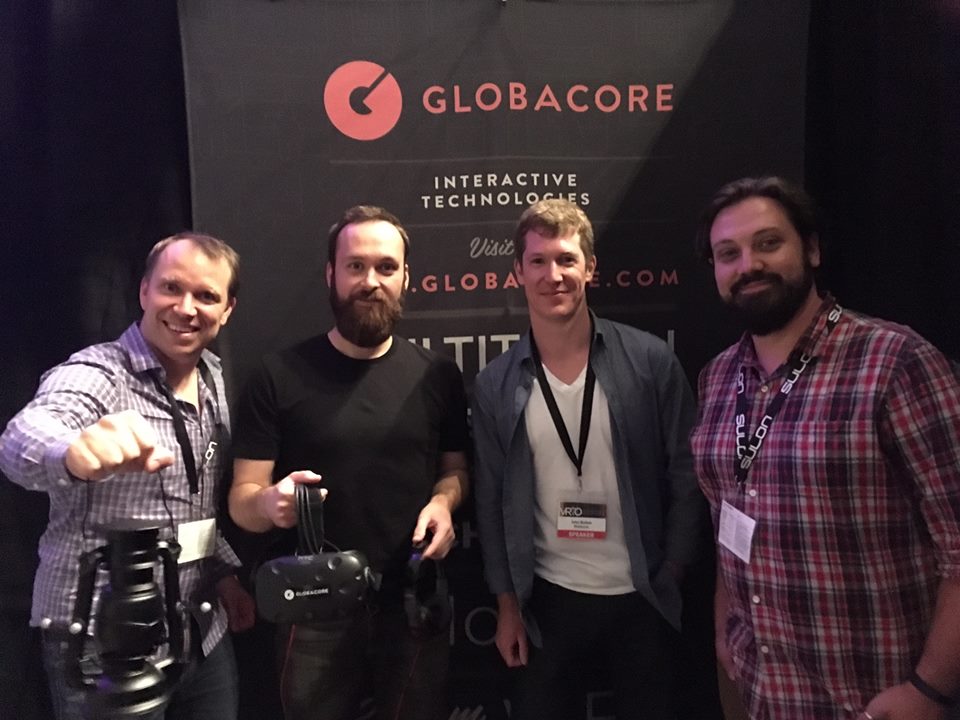 Driven by the experiential need to provide live entertainment to groups Globacore is on the leading edge of “Room-Scale” VR development. Room-Scale provides an expanded VR environment with larger tracked space and a wider range of movement complete with motion detectors and controllers. The EscapeTombVR experience showcase allows visitors in a dark tomb to use a lantern to align precious artifacts and then escape, taking immersive fantasy to the next level.

During a Super Session hosted by Serrano called “OK, So We Can Shoot in 360. Can We Start Making It Interesting Now,” Nick Bicanic, CEO of RVLVR, put storytelling challenges and VR into context. “We’ve had more than 100 years to develop traditional cinematic language,” he said. “Now we need to break walls and tell stories in different ways with VR.” During the session, we examined the challenges of writing a new language for VR filmmaking, creator consideration sets, and overcoming VR cinematic storytelling challenges.

Producer, writer and director Rose Troche, who’s currently developing a VR Comedy sketch series, and whose work Chapter 1: Perspective allows viewers to experience the same encounter from two completely different points of view, recognized the impact of VR on storytelling. “Self-authoring, POV, 360 filming, having a body versus no body in the decision changes VR scripts, casting and shooting. It’s hard to monitor captured sequence/review shots on set. As tech develops so does the dramatic experience. We are all here to learn from each other, and gather best practices, too.” 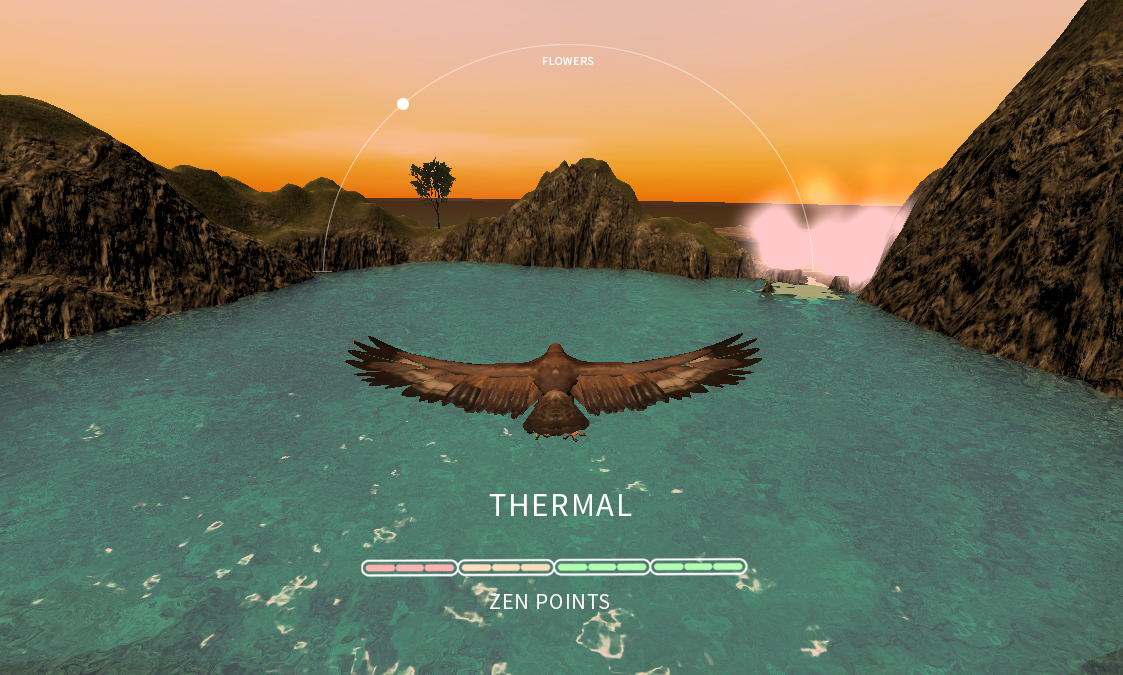 With so much mind-blowing AR/VR knowledge sharing – conference goers were eager to test their brainwaves via the Qualia Zen Eagle experience engineered by IDEABOOST Network Connect company Mobio Interactive. Visitors measured their mindfulness through flight exploration as an eagle, incorporating elements of biometric measurement. CFC Media Lab’s showcase included viewings of the Canadian Genre VR Film Series, which recently travelled to Cannes. Read more about the experience at Cannes here.

Finally, we were excited that the VRTOC2016 crowds expressed interest in the Pulse on VR study co-authored by CFC Media Lab and OMERS Ventures, in collaboration with Nordicity, focused on the VR ecosystem in Canada. VR content creators and companies were eager to share their input, which will significantly enhance the findings and outcomes of the study.

Take the survey (and get the results) by signing up here.

Six Canadian Films to Get You Ready for Summer