Held at The 14th Factory, Simon Birch’s sprawling 150,000 square foot art installation, a packed house of VR producers, technologists, art world figures and students were treated to an invigorating conversation about the intersection of VR and immersive art this past weekend at CFC Media Lab’s COLLISIONS VR salon. 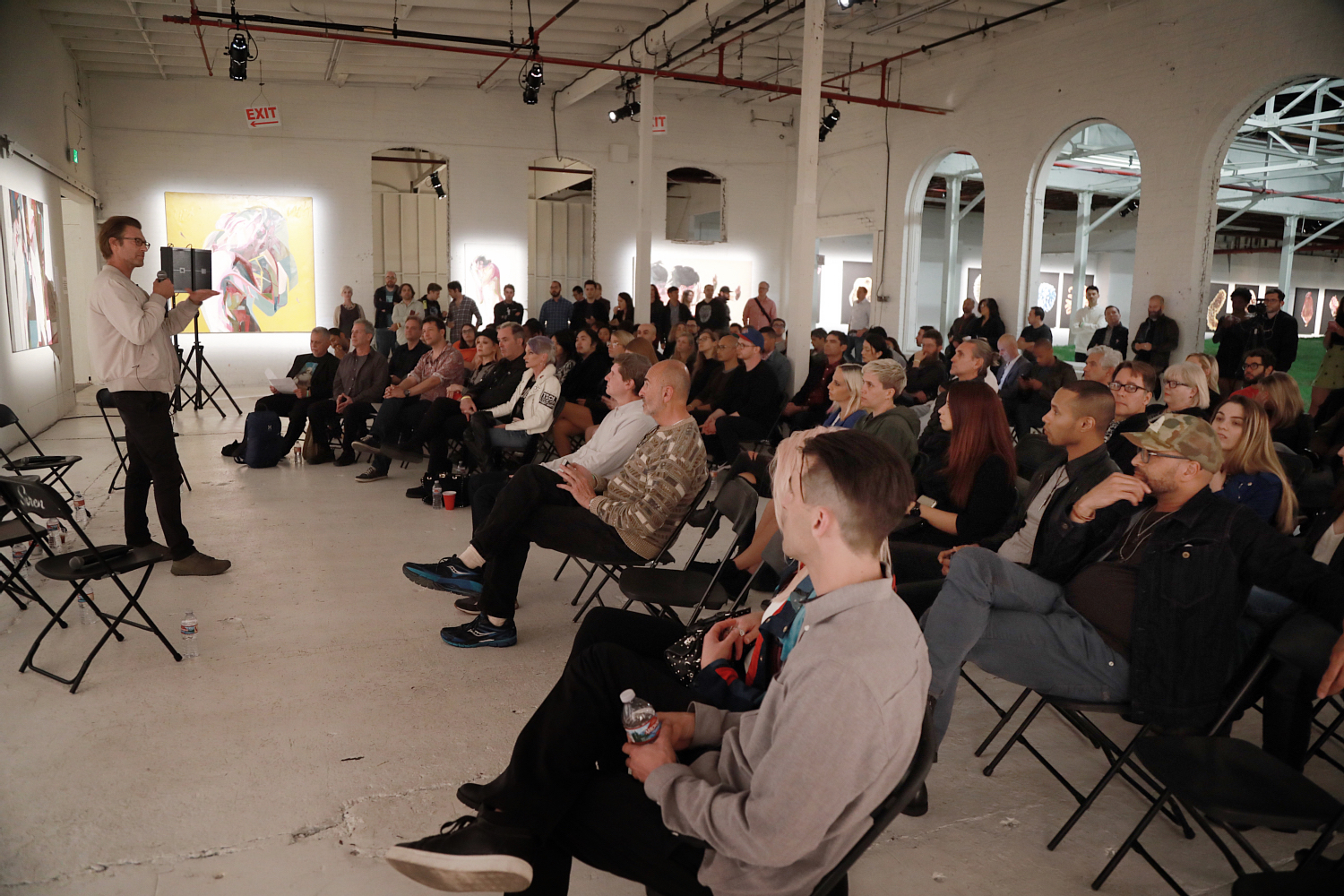 Michael Naimark, artist, inventor, scholar and Google’s first-ever resident artist in its VR division, kicked off the evening with a keynote address that touched on four “vignettes” about lessons learnt in his career as an artist and technologist.

“An artist walks into a bar, and there is the director of Microsoft Research,” he began his address. “Wait, it’ll never happen. They drink at different bars and live in different cultures. The artist is socially, politically and spiritually savvy. Meanwhile, Microsoft, Google, Apple and Facebook spend $10 billion a year on research. Artists may have solutions to the problems that corporate researchers spend months to solve … and artists may provide a more holistic and less myopic approach.”

This idea set the tone for the evening – that researchers and developers working in VR tend to focus on the technological aspect but sometimes forget to check in with artists who might be able to subvert their thinking. 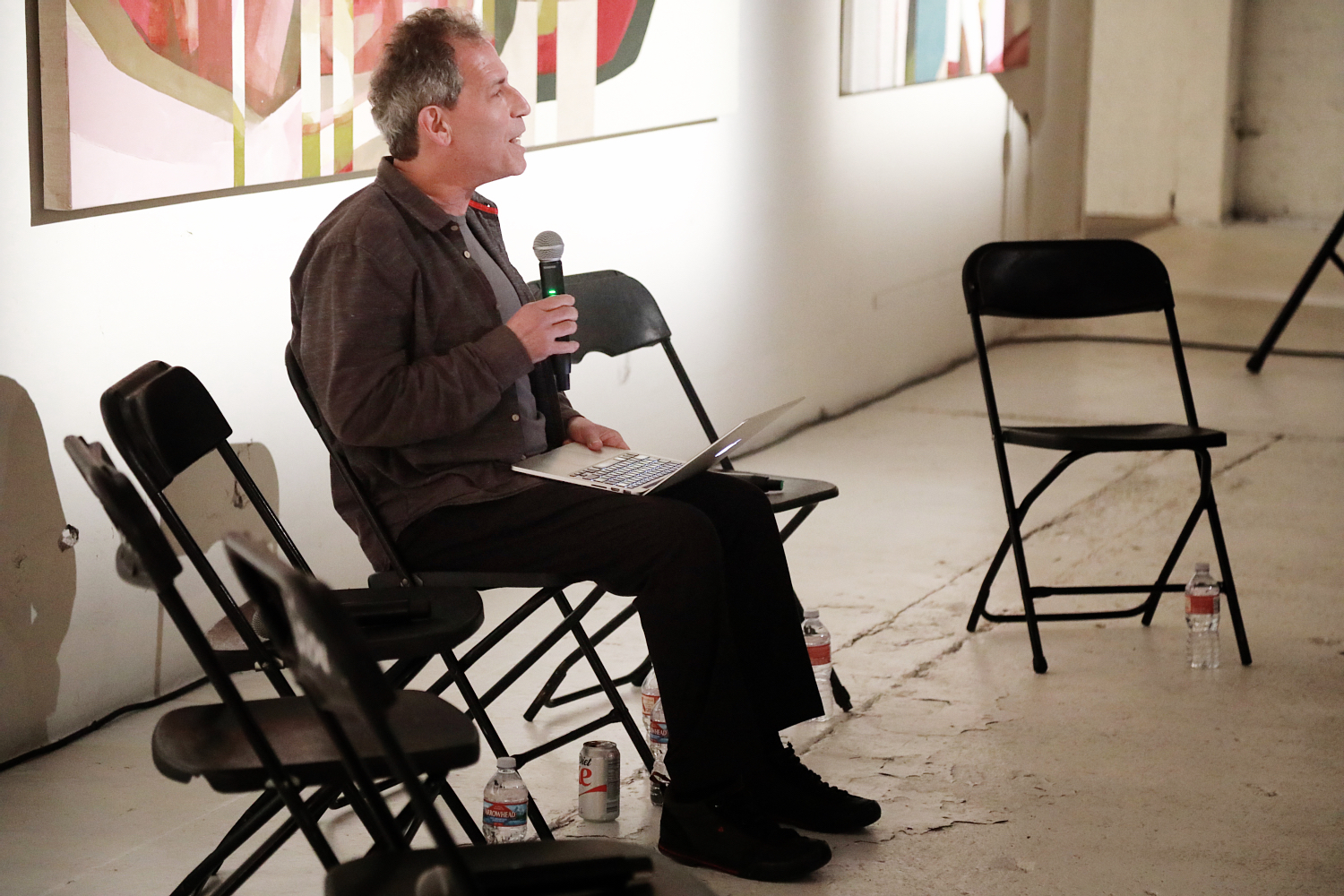 Naimark’s vignettes focused on his time at Paul Allen’s Interval Research Corporation, where he worked in the 1990s; at USC Cinema’s Interactive Media Division where he taught in the 2000s; and on his recent experience at Google VR; and were divided into the categories of Research & Development, Art & Money, Content & Technology and Focus & Perspective. He finished his keynote with a rallying cry.

“I am convinced that VR and AR have created a magic moment that doesn’t come very often in the histories of media and technology. There’s a lot of confusion but there’s also a lot of opportunity,” he said. “So, if there’s one suggestion I have for all of you working in VR and AR, it is: surprise us!”

Following Naimark’s address, Ana Serrano, CFC Chief Digital Officer, and founder of the CFC Media Lab and CFC’s digital media accelerator, IDEABOOST, led a panel of major figures in the fields of art and VR: Thomas Wallner, an award-winning filmmaker and CEO and founder of the Liquid Cinema VR platform; Samantha Mathews, co-founder and CEO of Venn.Agency, an immersive art agency focused on building an infrastructure to introduce more VR onto the web; Los Angeles-based sculptor and performer Elizabeth McGrath; Keram Malicki-Sánchez, founder of VRTO (Toronto’s VR Conference and Expo) and FIVARS.net (Festival of International Virtual and Augmented Reality Stories); and Simon Birch, whose self-funded exhibition took five years to create and contains a replica of the bedroom from 2001: A Space Odyssey, among other surprising installations. 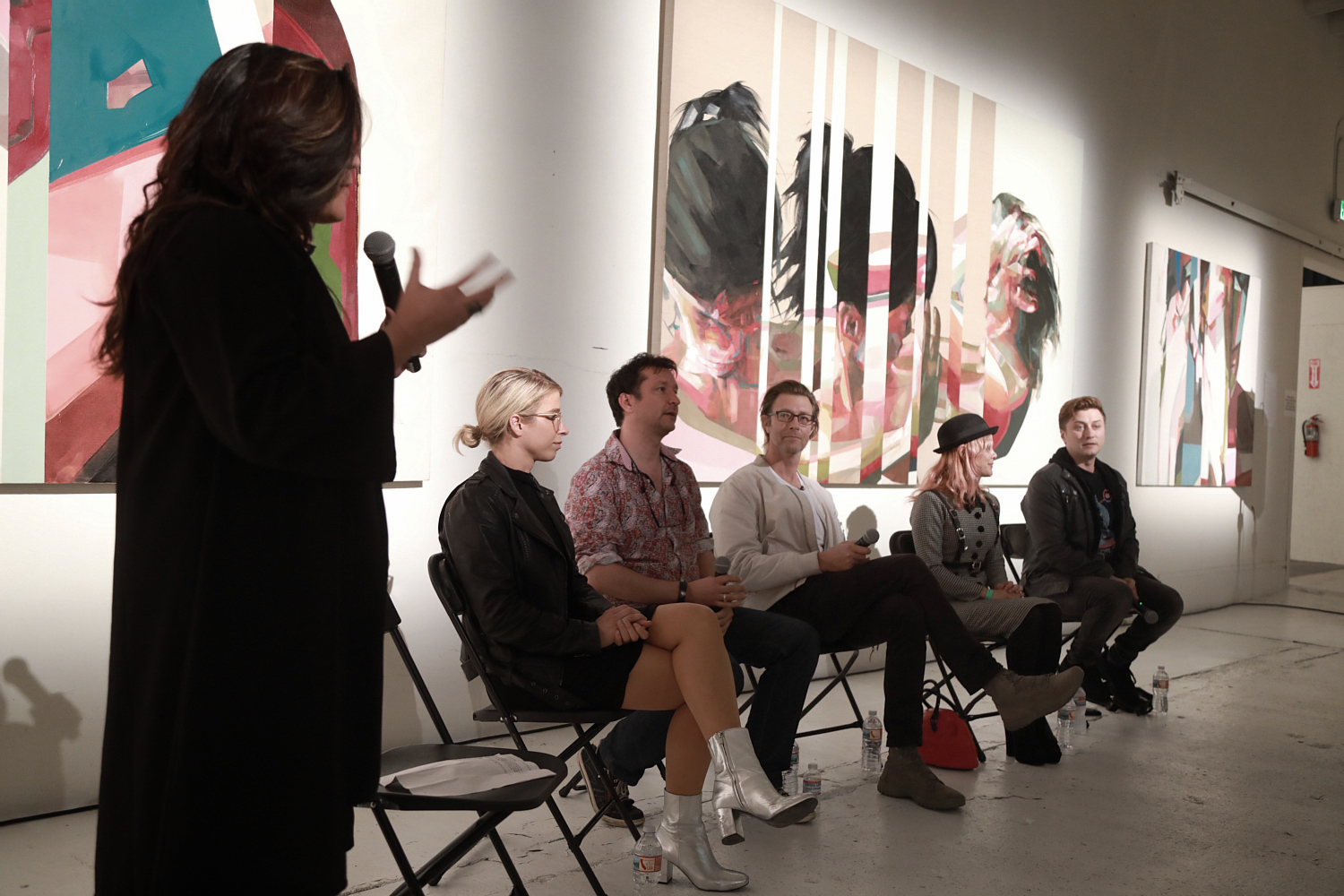 “This medium right now is unforgiving, and there are a number of problems with it, not least of all the fact that it privileges literal-ness and place and location, as opposed to expression,” Serrano began. “How do we battle that?”

Wallner, whose platform Liquid Cinema was on display in the next room as part of three IDEABOOST-sponsored demonstrations, tackled the issue of how we view narrative VR and “respecting what the brain wants to understand.”

“In film, we’re taking fragments and abstractions of the world and we’re assembling these fragments into a narrative. That narrative is actually created by the imagination of the observer and those fragments of reality are just metaphors of reality,” he said. “The thing with metaphors is that you can be creative and playful with them and create bits of meaning that wouldn’t exist unless they collided. In film, space and time are created. Right now, it seems that space is space and time is time, and it’s a terrible shackle because when we have ideas, we do with time and space whatever we want.” 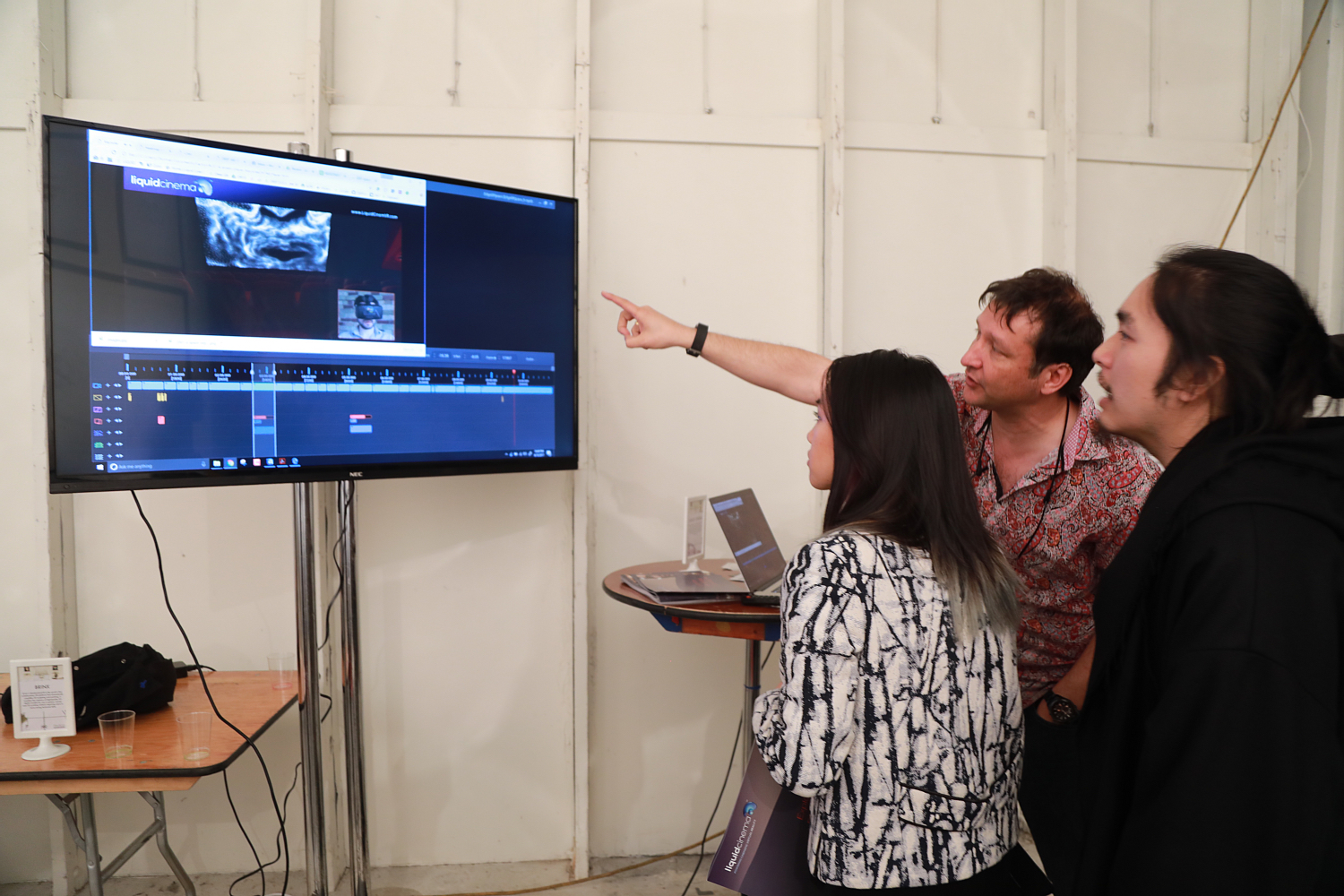 An audience member made the point that Wallner’s statement of “space is space and time is time” in VR and gaming isn’t entirely accurate, saying, “You’re playing Candy Crush, and the next thing you know, five hours has gone by. I feel like space, especially with [cinematic] VR, where you’re hiding all the senses around you, or transforming them somewhere else, you can now blend space and time together.”

Mathews agreed. “A fun way to play with space and time in VR is by constantly scanning different instances and taking the medium to another level … It’s like [what Wallner said]: respecting what the brain wants to understand.”

Malicki-Sánchez of FIVARS added that VR is not only respecting the way the brain operates, but mirroring its use in the real world, and that VR needs to meet the brain halfway. “We’re talking about the provocation of ideas, letting your brain do the rest of the work which is sort of what’s going on in reality anyway,” said Malicki-Sánchez. “Our eyes are scanning thousand times right now, we’re filling in the blanks, so now we’re understanding just how much it takes. Low-poly VR is typically much more immersive, some would argue, than super high-def. Once it goes into the uncanny valley, [VR is less immersive]—there’s something to be said about just the suggestion or insinuation.”

The conversation turned to empathy, and with the panelists agreeing that VR has been railroaded into being seen as an “empathy machine”—often the technology is used to put people in war zones or allow them to experience abjection.

“It’s actually an empathy killer,” said Wallner, who described being immersed as something that can distract from the reflection that the distance between the viewer and, say, a film might foster.

After the discussion, the audience demoed Wallner’s platform and the works of two other IDEABOOST VR start-ups — FilmTyme, who have created a suite of tools that allows users to “record” and make films while inside VR environments, and Brinx Software’s MasterpieceVR, which is an incredibly intuitive collaborative VR sculpting program (like being inside a virtual reality Photoshop with other people). 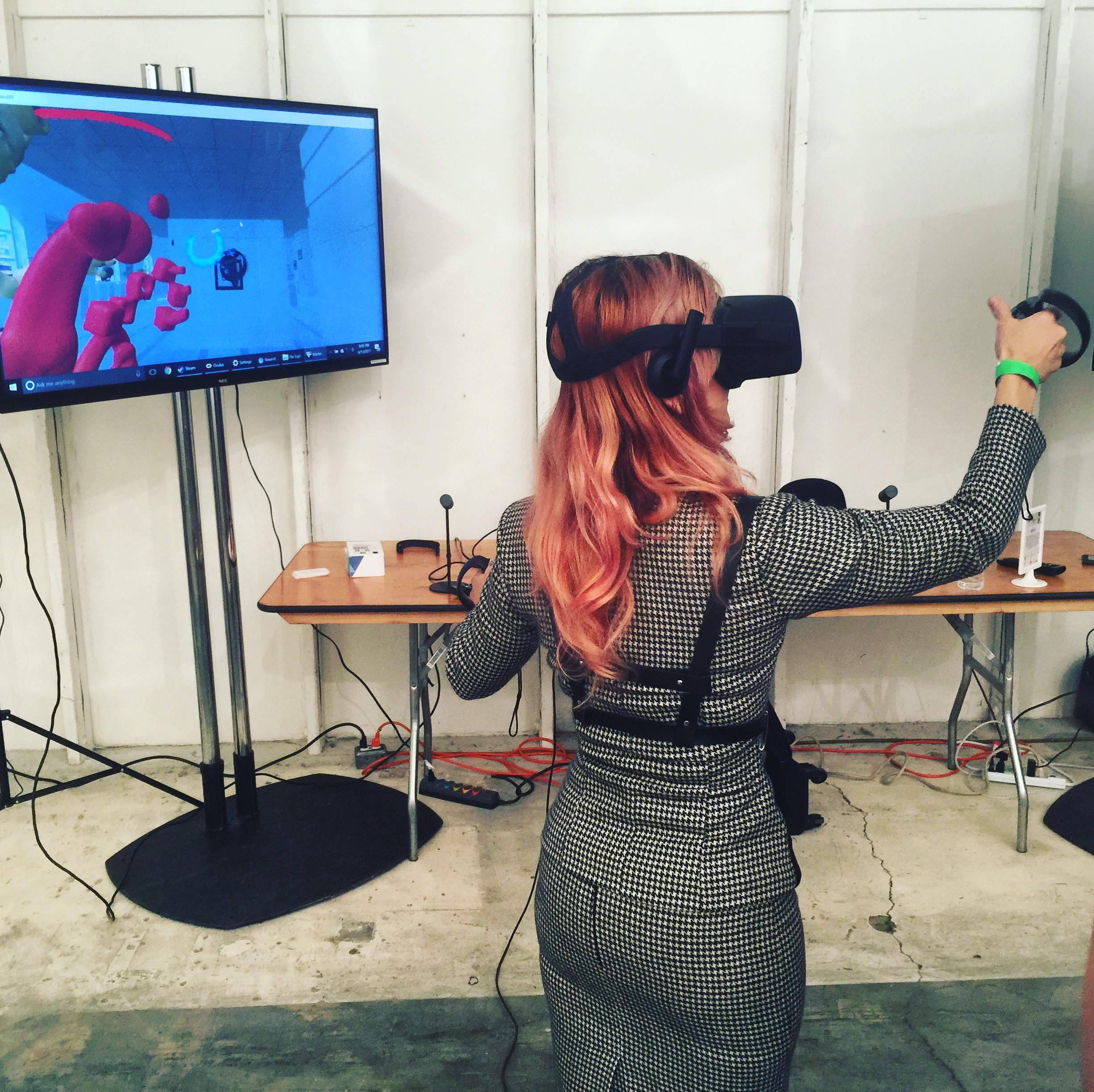 Elizabeth McGrath, the sculptor whose surreal sculptures often contain intricate little universes, felt at home using MasterpieceVR. “I thought it was awesome,” she said. “I’m a way stronger sculptor than I am drawer, so it was just perfect. I think if I got on there for an hour, I would be able to figure out at least how to do the basic shapes. [Brinx CEO Jon Gagne] said you can export it into a 3D printer.”

As for Birch, he was pleased that the VR audience was taking in his work and engaging with the work. Before the panel, he relaxed in the café area of the exhibition and marvelled at the VR crew inhabiting the space.

“I think it’s rare that a technology audience looks at contemporary art,” he said. “You do see technology in art but it tends to be token-esque or a novelty. But for technology to come here and inhabit the space for an evening and converse is pretty cool. And I’m not sure that happens in the institutional structured art world, but maybe it’s time for a renaissance, where these things start to connect more thoroughly and authentically. It’s a privilege to be a part of that conversation.”

Five Tips for Startups in the VR Space