Five Hot Docs to Watch Out For 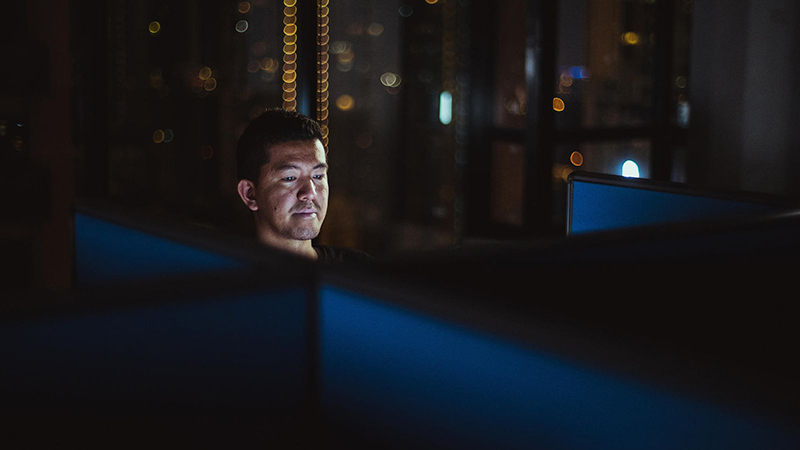 One of the content moderators at work in 'The Cleaners.'

Officer’s work and several other CFC projects at Hot Docs 2018 inspired us to attend this year’s festival, which took place from April 26 to May 6 in Toronto. Below are five films on entertainment, performance and digital media we enjoyed, from the ethics of artificial intelligence and social media censorship to the creative process for television writers, musicians and fans.

The “cleaners” here are people hired by shadowy corporations in the Philippines to work as “content moderators,” checking global social media accounts and YouTube uploads 24/7, removing material considered objectionable by the corporation’s guidelines,

Much of the film’s soundtrack is a riveting refrain of the words, “ignore, delete.” Like a noir technothriller, The Cleaners delivers a morally gray portrait of execs at Google and Facebook; censored artists and activists; threatened journalists; and the content moderators themselves. What could have been a simplistic condemnation of internet censorship shifts when moderators describe the violence and abuse they routinely see. One has seen hundreds of beheadings; another, horrific child abuse. The Cleaners empathizes with these “digital janitors,” ordinary people fleeing poverty and tasked with hard judgment calls that leave them, like us, pawns of a heavily data-managed global economic order.


A must-see for any writer or creative person, Don’t Be Nice chronicles five slam poets from the Bowery, New York who, over the Summer of 2016, prepare for the upcoming national poetry slam competition. What could’ve been a standard competition doc morphs into a sensitive, urgent study of these five talented poet-performers and their team.

Don’t Be Nice’s heart rests in coach Lauren’s refusal to let the poets play safe. She challenges them to write with vulnerability and “find the story behind the poem – and then the story behind that story.” The result is a moving meditation on what it means to be creative while channeling, or being undone by, racism, homophobia and violence – and always making hard choices on the page and in the moment.

More Human Than Human takes an in-depth look at artificial intelligence (AI) from the mid-twentieth century-on, speculating on the future coming up fast. Who will win, AI that positively enhances or negatively eclipses our experience as humans?

Like The Cleaners, More Human Than Human rejects a clear for-or-against stance in these ethical debates. It shows how much all of us are already engaging with AI: as tools for combatting loneliness in the elderly, grieving and autistic; as fun and zany onscreen games and entertainment; as search tools on our phones; or as potentially dangerous job-replacements and terrifying war technologies. We also see filmmaker Pallotta collaborating with a team of robotics engineers across the film, building a robotic arm-camera to interview him at the film’s conclusion – a result definitely worth seeing and reflecting on after.

Until SOUL!’s defunding in 1973 (which Nixon demanded), Haizlip did extraordinary work. He hosted pivotal figures of African and African-American music, poetry, dance, art and politics: musicians like Ashford and Simpson, Stevie Wonder and Patti Labelle; poets like Nikki Giovanni, Sonia Sanchez and James Baldwin; political figures like Kathleen Cleaver and Betty Shabazz. Thoroughly researched, the film’s archival footage reveals how groundbreaking this program was and still is. Mr. SOUL! also shapes an archive for disappearing Black voices, a treasure trove of performers and historical reflections that inspires us to see what public broadcasting can do – build extraordinary television, even against all odds.

As a medium, television has created a more interactive, intimate relationship between its creators and audiences than film, with its comparatively more finished, finite products. As early as 1954, I Love Lucy’s producers glimpsed the power of TV fans when stations around the U.S. were flooded with complaints by the State of the Union presidential address pre-empting Lucy!

Closer to home, CFC alumnus and Canadian filmmaker Michael Sparaga has made a smart and witty film that chronicles grassroots TV fans’ campaigns to save their beloved programs like Cagney and Lacey or St. Elsewhere. TV fandoms are often portrayed as dangerously over-identified; United We Fan takes a more measured, even lighthearted tone. It recognizes and celebrates fan investment, and their ingenious campaigns that helped reroute cancellations and character arcs. The film suggests that contemporary TV fandoms are a force to be reckoned with; they should be actively listened to by writers and producers seeking to build this engagement, during, if not before, the story even starts.