Putting Canada on the Screens of the World: The 2018 CFC Annual BBQ Fundraiser

Chilly winds and grey skies did not deter the more than 2,000 guests from attending this year’s CFC Annual BBQ Fundraiser on Sunday, September 9. Guests took a break from movies and pitches at the Toronto International Film Festival (TIFF) to head to the CFC’s heritage grounds of Windfields Estate. This year’s gathering, one of our largest and most well-attended fundraisers ever, also marked the CFC’s 30th anniversary. Since 1988, the CFC has produced and nurtured great Canadian talent. Two exciting announcements made at the BBQ reveal that this work will continue and broaden in scope, thanks to a new five-year Netflix-CFC partnership and scholarship for Indigenous filmmakers.

The CFC Annual BBQ Fundraiser contributes to our charitable work of accelerating the content, careers and companies of Canadian creative and entrepreneurial talent in the screen-based and digital industries. It is also a key festival destination and popular networking event. Held annually during TIFF’s opening weekend, the CFC BBQ has grown in scale, much like the festival itself. 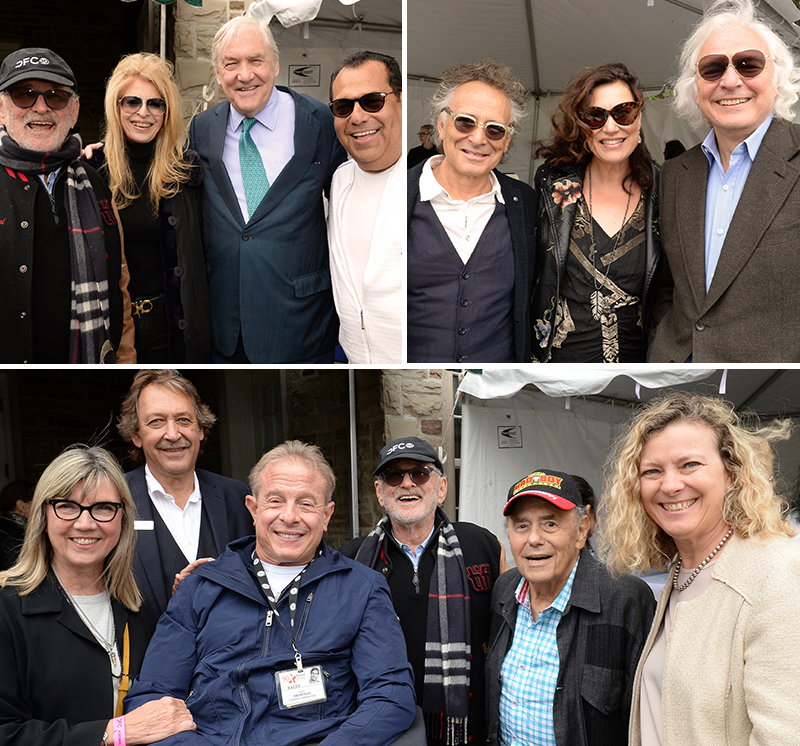 Our emcee for the afternoon was Christina Jennings, Chair, CFC Board of Directors, and Chair & CEO, Shaftesbury, with host Slawko Klymkiw, CEO, CFC, and CFC Founder and Chair Emeritus, Norman Jewison (who attended with Lynne St. David Jewison) also speaking.

The CFC Annual BBQ Fundraiser also offers us an opportunity to applaud our many talented CFC alumni and supporters with projects in TIFF – a direct result of the talent coming out of our programs. 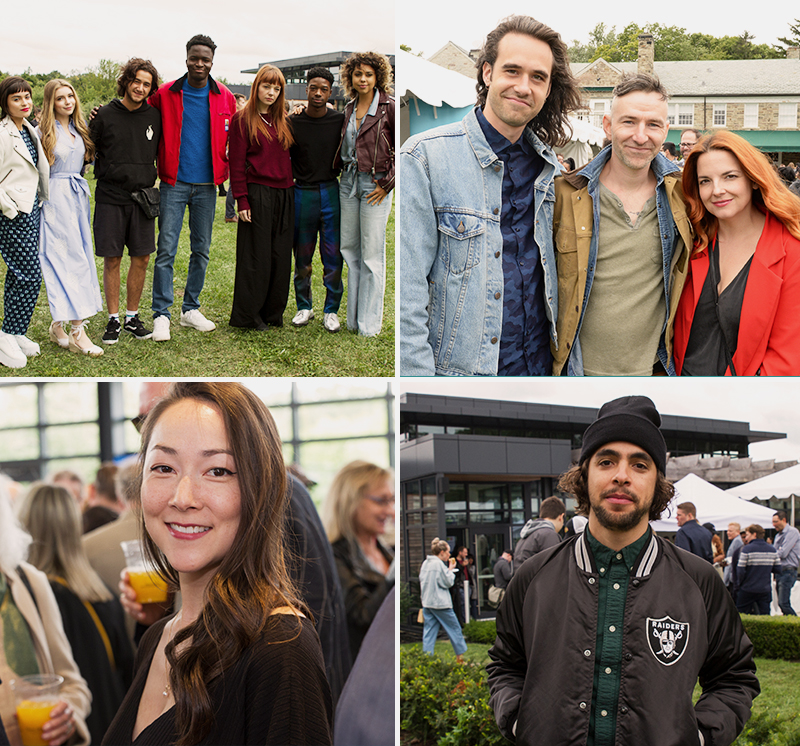 Mid-afternoon, Christina Jennings took to the stage to thank our sponsors (see the full list below!) for helping us celebrate “30 years of shaping Canada’s entertainment landscape.” She also made the first of our two major announcements, sharing that on Friday, September 7, Paul Bronfman, Chair and CEO of Comweb Corporation/William F. White International Inc., and Slawko Klymkiw, CEO, CFC, announced the creation of the Jay Switzer Comweb/William F. White Indigenous Creator Scholarship to be administered through the CFC in memory of this visionary leader. The award, valued at $100,000, will be distributed over 10 years at $10,000 per year, and honours Jay Switzer’s legacy and his unwavering support of the Indigenous creative community. “Through this award,” Jennings noted, “he will live on in our industry." 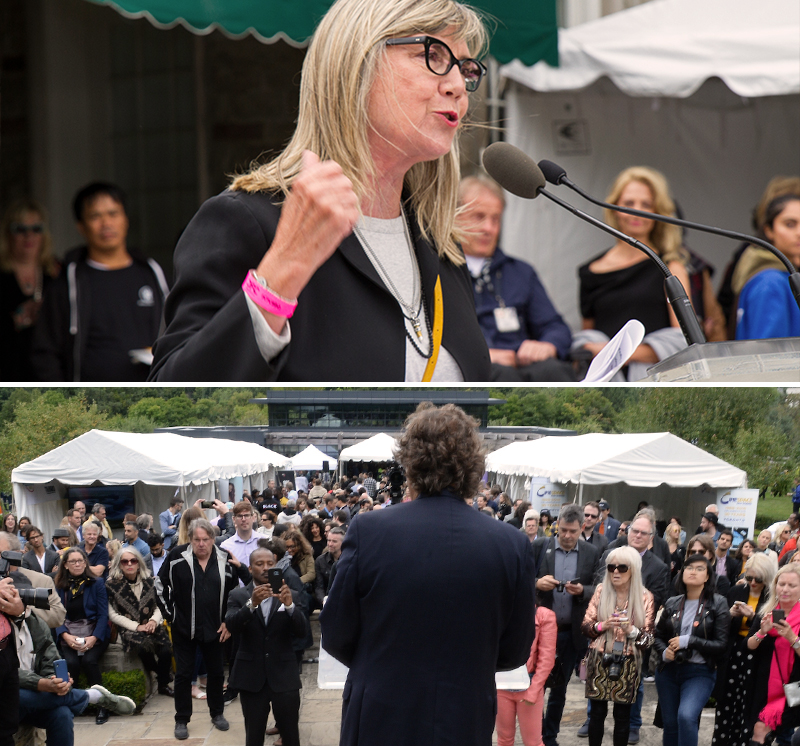 Slawko Klymkiw spoke next, and began by celebrating the more than 1,800 talented CFC alumni and residents who have formed “hundreds of renowned and award-winning content, production, technology and digital media companies.” He also expressed gratitude to the Government of Canada, the Government of Ontario and the City of Toronto, “for their vital support of the CFC from the very start."

Klymkiw then made a second major announcement – the establishment of the prominent new five-year partnership, the Netflix-CFC Global Project. This project will encompass three distinct accelerators, all focused on expanding opportunities for Canadian creators, who, he noted, “offer a diversity of perspectives and voices to showcase their talent, support their projects, and increase their potential to achieve global resonance.” Klymkiw reminded guests that “Netflix is no stranger to the CFC,” given Brad Wright's acclaimed series, Travelers (developed here through the Bell Media Prime Time TV Program), as well as their work with and investment in original work from CFC alumni such as Dennis Heaton, Shelley Eriksen, Aaron Martin, Brad Peyton and Vincenzo Natali, among many others. 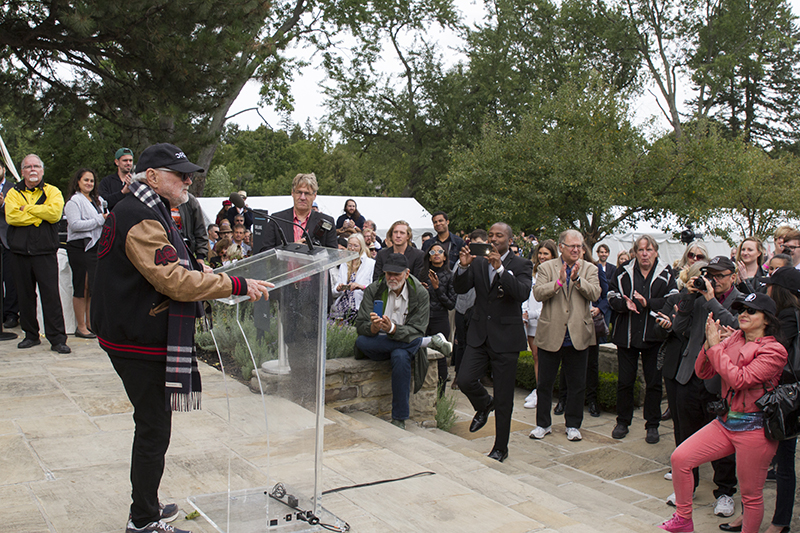 Norman Jewison speaks to the crowd about the value of putting Canada on "the screens of the world" (Photo: Danilo Ursini)

Of course, we all treasure the opportunities to hear our Founder and CEO, Norman Jewison, offer his reflections on the CFC’s history and future. As usual, he did not disappoint. He began by bringing onstage and paying tribute to the honourable former mayor of North York and Toronto, Mel Lastman, for agreeing to provide the CFC with Windfields Estate. Lastman was, in Jewison’s words, “the man who really made it happen.” Thirty years ago, Jewison went to Lastman with “an idea for a film centre, where young filmmakers can come, because Canada didn’t have one.” At the time, Jewison said, “The Americans have the American Film Institute, the British have the British Film Institute, the French have the French Cinematheque. Canada needs a film centre. You can do this, Mel, if you give me the rights to the estate of Windfields. Because we need a place. You have to start with a place.” Lastman replied that this would “cost” Jewison – a whole dollar a year!

Jewison noted that both the CFC and wider industry are once more on the cusp of change; after all, TIFF’s opening film this year was from Netflix. As the festival heads into its 43rd year, he noted that we at the CFC have “grown alongside” TIFF – and that we are now both “growing in the right direction.” Thanks to this new Netflix-CFC Partnership, Jewison noted we are “moving with the industry” and building new generations of Canadian talent to be proud of. Our CFC alumni are now working all over the world, he said, “producing wonderful stories that are putting this country on the screens of the world." 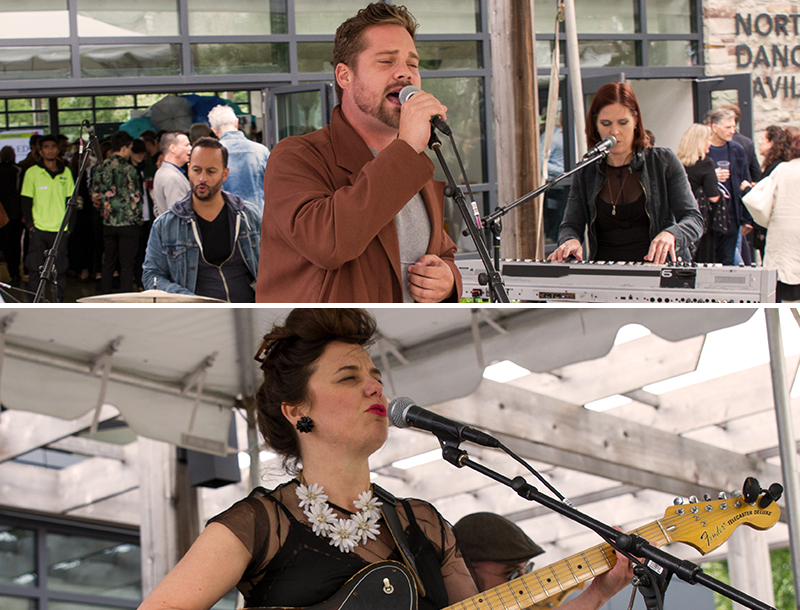 There was no shortage of delectable refreshments or entertainment throughout the day. After the speeches, we were treated to two riveting musical performers: Rebecca Everett, alumna of the Slaight Family Music Lab, followed by Theo Tams, who performed courtesy of Slaight Music. Also, as part of the event’s fundraising activities, we held a raffle for one lucky winner of a two-night stay at the unique Anndore House in Toronto, with dinner for two at Constantine Restaurant and a $250 gift card donated by Anzie Jewelry. 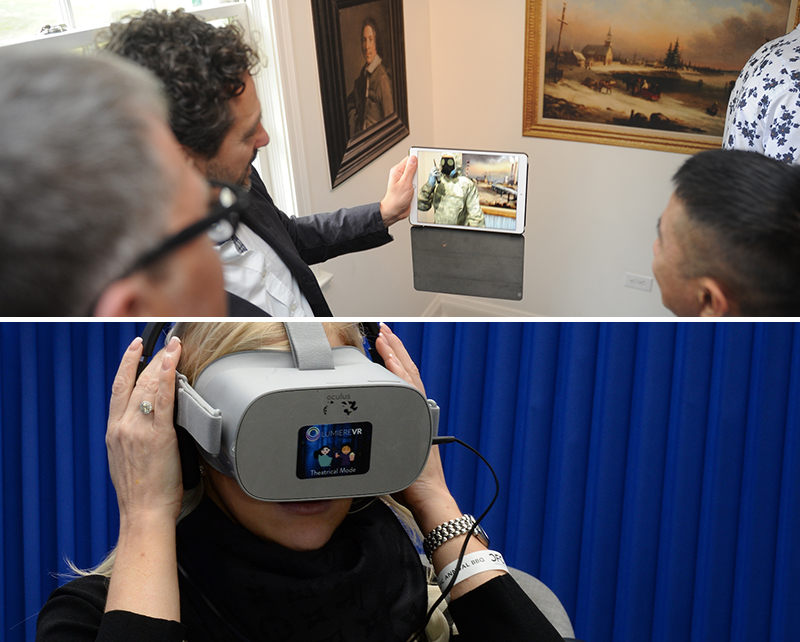 Overall, the afternoon was a huge success, with an unprecedented number of guests showing up to celebrate our past 30 years of shaping Canada’s entertainment landscape and toast to our future.

Relive the magic of the day with our gallery of photos. 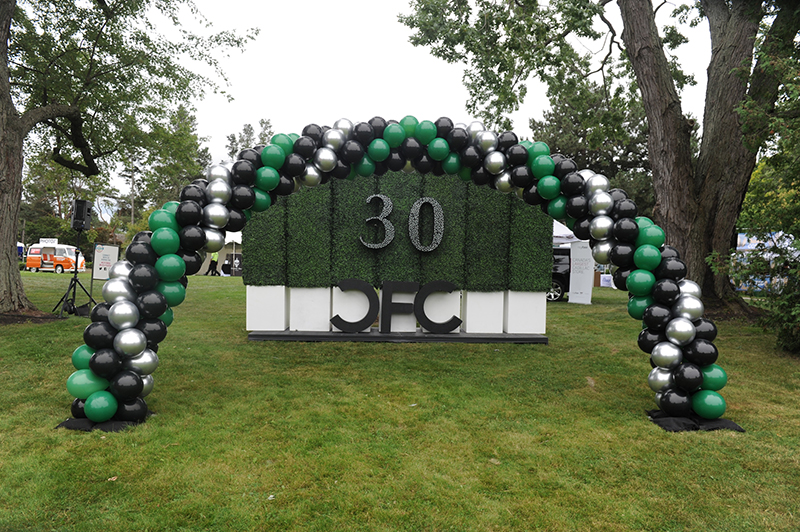 Thank you to all of the 2018 CFC Annual BBQ Fundraiser Sponsors!