Five Festival Faves from TIFF to Look Out for


Another Toronto International Film Festival (TIFF) has come and gone. Celebrities and cinephiles have decamped from the red-carpet, and we’re rediscovering other foods to eat for dinner besides popcorn.

CFC was in the audience and saw some of our alumni’s gems over those action-packed 10 days. Two special shout-outs are in order. First, to 2018 Cineplex Entertainment Film Program producer Evren Boisjoli for his work on the short film, Fauve. It won an honourable mention in the IWC Short Cuts Award for Best Short Film “for its confident visual storytelling and moving performances from the child actors."

Second, CFC’s executive in charge of programs & talent Erica Proudlock noted that “this year’s Pitch This session was impressive – passionate, professional and specific! All six teams, four headed by CFC alumni, found a compelling way to convey their project, the ‘why now,’ and their needs for the additional development money.” This year’s winners were CFC alumni Gharrett Paon and Bretten Hannam for Wildwood, a two-spirit coming-of-age drama of a rebellious Mi’kmaw teenager who runs away from home to find his birth mother – and reclaim his heritage. Erin Burke, CFC’s associate director of programs & content, noted that “it was exciting to see a project we helped develop in our Producers Lab present so strongly, and to see it all come together in a very compelling, polished package and presentation."

Below are five festival faves made by CFC alumni to keep an eye out for.

Jasmin Mozaffari’s Firecrackers, which Simone Smith edited, Matt Code and Paul Barkin executive produced, and for which Casey MQ composed the music, tells the tale of two young women desperate to escape their repressive small town. Kathryn Emslie, our chief programs officer, said the film “had a strong cast, some exciting, kinetic cinematography and editing, and an awesome score propelling it forward with great emotional intensity."

Emily Gagne, our social media & digital media communications specialist, added, “With striking cinematography from Lutes that recalls the work of Sean Baker (Tangerine, The Florida Project), Jazmin Mozaffari’s first feature really stood out at TIFF this year. Like Baker, Mozaffari seems to revel in the beauty of small moments and places, while also being unafraid to tackle bigger, more challenging topics head on. I can’t wait to see what she does next!"

Giant Little Ones could have trod an all-too-familiar narrative path: alpha-boy best friends Franky (Wiggins) and Ballas (Darren Mann) hit an impasse on the way to growing up – and maybe coming out. Yet the film refuses facile answers about what it means to become a man; or woman, for the film features sensitive supporting turns by its female actors. Giant Little Ones explores realistically how to define one’s own sexual identity as fluid, not fixed, something that evolves across a whole life, not just when leaving adolescence behind.

The Grizzlies was directed by alumna Miranda de Pencier, produced by alumnus/mentor Damon D’Oliveira, and made in creative collaboration with Inuit producers Alethea Arnaquq-Baril and Stacey Aglok MacDonald. Shot in MacDonald’s community in Nunavut, this inspiring true story of the Kugluktuk Grizzlies lacrosse team world-premiered to a standing ovation. Its large cast and producers spanned the full Winter Garden stage – a testament to strong community-based storytelling.

Inuit youth anchor and propel The Grizzlies, a film that is by turns droll comedy, heartwarming sports story, and heart-wrenching tragedy of Inuit youth suicide. It handles it all with a deft touch, tremendous respect, and, in Emslie’s words, a “huge heart,” all with “amazing performances from a formidable Indigenous and Nunavummiut cast,” in a setting and with cinematography that are “absolutely stunning." 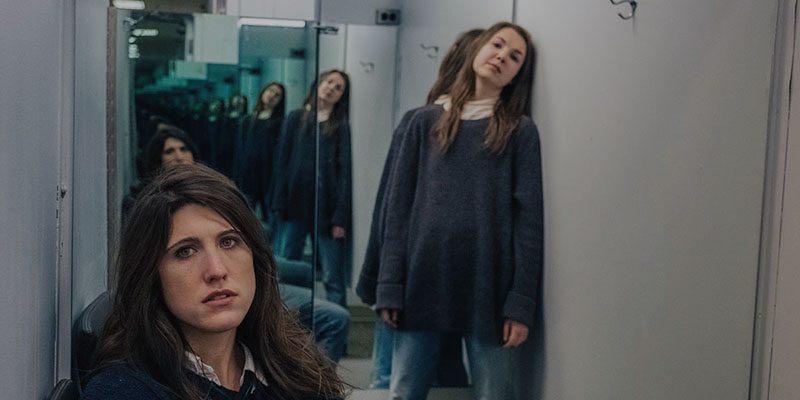 Patricia Rozema’s Mouthpiece was produced by Jennifer Shin and frequent CFC mentor Christina Piovesan, with Brendan Brady as line producer. It adapts an award-winning two-hander about an aspiring writer attempting to reconcile her feminism with the conformist choices of her mother after her mother's sudden death. Burke felt the emotional resonance in Mouthpiece. “It really snuck up on me, in the best way. I admire the craft that leads to that kind of impact."

The film turned its strong source material into a rewarding story that also made it “a highlight this year” for Proudlock. “Exceptional performances from Norah Sadava and Amy Nostbakken in their feature debut gave the film its heartbeat. The story centres on a woman struggling to deal with the loss of her mother, and they physicalized the duality of inner conflict in a way that was both cinematic and playful. Mouthpiece was moving, funny, complex and relatable, with stunning music. Big congrats to everyone for bringing this film to life."

Writer/Director Stella Meghie's The Weekend follows up her 2016 TIFF hit Jean of the Joneses with this story: an acerbic comedian gets romantically entangled with her ex, his new girlfriend and another guest on a weekend getaway. Emslie saw it as “smart and sexy with some great laugh-out-loud moments. Truly some of the snappiest dialogue and clever one-liners I’ve heard in a long time. Great cast, great music, great writing – this is a fresh, contemporary, funny romantic comedy."

Gagne added, “If you liked the comedic elements of Jean of the Joneses, then you’ll really enjoy this film, which is her first straightforward comedy and a very fun watch. The Weekend is anchored by an irresistible lead performance by Sasheer Zamata, but the supporting cast is great too, including DeWanda Wise (the star of Netflix’s She’s Gotta Have It) and Kym Whitley. The impish score pays tribute to ‘70s romcoms by once-iconic creators who shall remain nameless, but Meghie’s direction is undeniably modern. That suggests we need to stop living in the past and support more fresh voices and visions in comedy today."

Keep these five festival faves on your radar, so you too can support these fresh Canadian voices and visions!

CFC Alumni up for DGC Awards