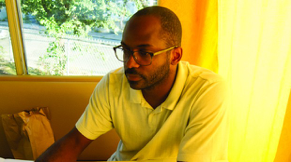 RaMell Ross is a Rhode Island based artist. He received a BA in English and Sociology from Georgetown University and an MFA from the Rhode Island School of Design. His work has been exhibited in the U.S. and internationally, and published in the New York Times, the Washington Post, Oxford American, and on CNN, while his writing has appeared in the New York Times, Huffington Post, and ESPN.

In 2015, he was part of Filmmaker Magazine’s “25 New Faces of Independent Film” and was a Sundance Institute New Frontier Artist in Residence in the MIT Media Lab. In 2016 he was a winner of the Aperture 2016 Portfolio Prize and an Arron Suskind Individual Photographer Fellowship. RaMell is currently a Research Affiliate at the MIT Media Lab and an Assistant Professor of Practice in Brown University’s Visual Arts Department. He is in production on his first feature film Idiom (Hale County This Morning, This Evening).