Happy International Women’s Day! We are joining the global celebration of women’s achievements by highlighting 10 talented, inspirational and groundbreaking Canadian women creators and some of their recent successes and contributions to the global screen industry.

These women are true creative and entrepreneurial forces who are transforming and making waves in the entertainment industry. They inspire us with their passion, fearlessness and dedication to raising the bar and ensuring the voices and talents of women are heard and seen globally. 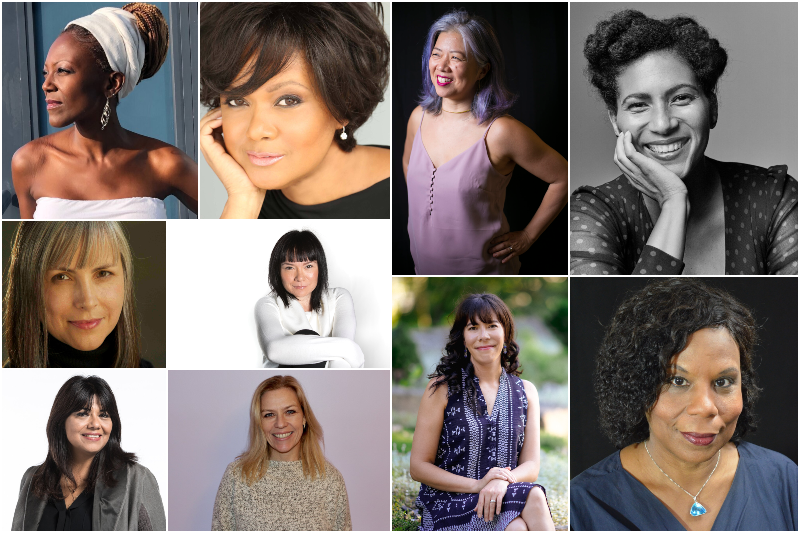 Read on to learn about these incredible women and some of their recent key achievements.

Carol is the co-creator of the acclaimed Women in the Director’s Chair, which provides professional and creative development to mid-career Canadian women directors of screen-based fiction through a variety of programs, workshops and initiatives. It’s no wonder Carol is celebrated for promoting equality in Canada’s screen industry. Visit their website to learn more about the impact WIDC has had on advancing opportunities for mid-career women screen directors and writer/directors.

Ella is an award-winning cultural leader, a passionate educator, and a group facilitator in addition to being an artist, producer, creator and the founder of Black Women Film! Canada. Black Women Film! Canada began as a leadership film program and has expanded to include a new collective – all dedicated to forwarding the careers, networks and skills of filmmakers and media artists who are Black female identified of the Canadian African diaspora. It provides networking opportunities for its community of emerging and established Black women filmmakers, spotlights Black and diverse women in film, provides an annual leadership program, a series of professional development and mentorship opportunities, and a directory of emerging and established Black women filmmakers and media artists in Canada.

You probably know Jennifer from her roles in Degrassi: The Next Generation, Take This Waltz, Empire of Dirt, Cardinal and more, but she is also an accomplished writer, producer and director of series like Unsettled, Future History, and is the founder of The Shine Network, a digital platform designed to empower and celebrate Indigenous women in film, television and media. Jennifer is also a CFC alumna!

Joan is a celebrated executive producer and media executive, a CFC alumna, and is also a founder and the inaugural Executive Director of the Black Screen Office, a not-for-profit organization whose mission is to support the development, production, and distribution of Canadian Black screen content. Joan also served for five years as Executive Director of Women in Film and Television - Toronto (WIFT-T), where she was a pioneer in developing professional training and networking opportunities for women in screen-based media, and she earned the Visionary Award from the Reelworld Film Festival (more on Reelworld later!) in recognition of her work to promote diversity within the entertainment industry.

Speaking of WIFT, Karen is the organization’s current Executive Director. She is known for being a champion for advancing, educating and mentoring individuals within Canada’s screen-based industry, and is committed to the development and advancement and celebration of women in the screen media industry and the fight to reach gender parity.

Mehernaz is a CFC alumna and the Senior Director of CBC Films, responsible for overseeing the funding and pre-licensing of Canadian features for CBC broadcast and streaming. Under her leadership, CBC Films funding supports the production of feature films led by women, LGBTQ+, Indigenous and diverse filmmakers that reflect a range of perspectives that are at the centre of the Canadian experience.

Nathalie has gone from being a professional harpist to reality TV director, to screenwriter in children’s TV and primetime drama series. She is also known for founding BIPOC TV & Film, a grassroots organization dedicated to increasing the representation of Black, Indigenous and People of Colour both in front of and behind the camera. It hosts a series of panels, Q&A sessions, workshops, networking events and provides opportunities to secure employment in the television and film industry, specifically targeted to BIPOC creators. BIPOC TV & Film also operates HireBIPOC, is an industry-wide roster of Canadian BIPOC crew and creatives working in screen-based industries.

Samantha is a CFC alumna and the Founder and Executive Director of The Independent Media Producers Association of Creative Talent (IMPACT), a national organization for independent media producers in Canada, working to unify and support members from Black, Indigenous People of Colour, LGBTQ2SI+, Trans, underrepresented and marginalized independent producers and companies in Canada. Learn more at impact-aptcmi.org

Tonya is famously known for her role as Dr. Olivia Barber Winters in The Young and the Restless, however she is also widely celebrated as the Founder and Executive Director of Reelworld for the past 21 years, which includes the Reelworld Film Festival, Reelworld Screen Institute and  now Access Reelworld, the largest searchable recruiting platform with over 100 job categories for Canadian Black, Indigenous and People of Colour in the screen industry. Reelworld is considered the oldest and largest national platform dedicated to creating access, opportunities and mentorship for content creators and all talent identifying as Black, Indigenous, Asian, South Asian, Middle Eastern, and Latin American in the Canadian screen production sector.

Tracey is an award-winning and long-time TV writer and producer (Mohawk Girls, Anne With An E), who is making waves for her critically acclaimed debut feature BEANS (which was proudly supported by CFC Features), which tells the story of a young Mohawk girl in Kanehsatà:ke amidst the 1990 Oka Crisis, and it centres on her own experiences growing up during the 1990 Oka Crisis as a Mohawk girl. BEANS was honoured as one of TIFF Canada’s Top Ten features of 2020, and Tracey won the TIFF Emerging Talent Award at the 2020 Toronto International Film Festival. We’re proud to also call Tracey a CFC alumna.